The Story Behind “Runaway Train” 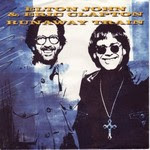 Anticipating the negotiations of a series of a double-billed concerts with Eric Clapton, Elton asked Bernie to write lyrics for a next duet between the two artists. “A lot of it has to do with the pain of losing” explained Bernie in the “Two in one” interview. Eric had also his personal tragedy after losing his son Conor in a tragical accident.

The song, in Liz Rosenthal’s analysis, “depicts a chaotic underworld of runaway trains Elton and Eric must dodge and the music grows as it evokes their determination to reach a positive end”.
by Jackrabbit on 1:05 pm