The Story Behind "Blue Eyes" 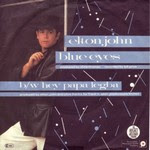 With lyrics provided by Gary Osborne, and written with Frank Sinatra in mind, Elton even contributed a phrase. Following Elton’s lead, Gary reverted to his method from “A Single Man” sessions, of penning words that attach themselves directly to the melody.

It was the last song recorded for the album. It was nearly abandoned after six takes, it was difficulty getting acceptable vocals because Elton sang in a lower-than-usual key.

“Blue Eyes” earned a Grammy nomination and climbs to the Top 10 in countries like England, Australia, Canada, Italy, Israel or Belgium.
by Jackrabbit on 11:30 am