The Story Behind “Victim Of Love” 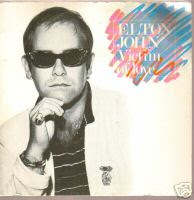 His disco debut was originally titled “Thunder In The Night” and the project was proposed by an Elton’s old mate Pete Bellote, after he attended an Elton’s concert in April 1979. Elton agreed to do the album, only doing vocals. He was surprised when he saw his friend in the listed credits of one of Donna Summer’s records. Elton was writing songs from “21 At 33” sessions when he flew to Munich to record his part on the album.

The Elton’s disco attempt was disastrous, reaching only number 31 in the singles music charts but no registering in the British charts. Philip Norman explained in his Elton’s autobiographical book that John Reid, Elton’s manager, “enraged response was another mass sacking of Rocket Records staff, including the managing director” sacked in 1978 for “Ego”’s flop success, restated later, and sacked for second time.
by Jackrabbit on 11:15 am