Hi Monalisas. Welcome to the “Rock Of The Westies” Week. Nice to “meet” you and thank you very much for the acceptation. You have been a long time eltonite, and a truly eltonite, following him with loyalty. As you know with this album, Elton changed his more commercial direction and recorded a rock album, and even, changed the band. I know you love most the romantic songs by Elton than the others… I am not wrong I suppose…

I'm Isabel (or Monalisas) and I'm from Buenos Aires, Argentina (although I'm living in the US since 1997) with my husband and 2 daughters.

Perfect. When did you became an Eltonite? Remember the first time you heard Elton's music and what moves you to buy his music?

The first time I heard anything from Elton was back in the 70's and the song was Goodbye Yellow Brick Road. I heard it on the radio. That song like hypnotized me. I wanted to know more about Elton. My birthday came along and got some money, so went to a record store and bought the only Elton record they had, Caribou! From then on I started collecting all his LP's, cassettes, and cd's. My favorite thing is to share with my friends what I've collected through all these years. 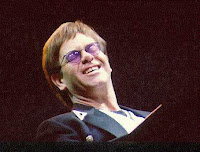 Living in South America is not easy for Elton fans. Sadly for us he's only been there twice. So I had to wait for nearly 20 years to finally see him. When the announcement that he was coming to Argentina was made (in 1992) I was sooooooooooo happy. My husband came with me and we had the best time ever, unforgettable. My seats were not that good but it was my first time seeing Elton live, what a wonderful experience.

He was going to come for a second time in 1995. I bought the tickets but unfortunatelly this show was cancelled.

So, my second show was The Red Piano. I loved the whole Vegas experience, although the show was too short and the crowds around me were totally quiet and bored.
My third and last time was here in Arizona for the Peachtree Rd tour. I got rocket tickets (5th row) and was a new and wonderful experience being so close to the stage and sharing the first rows with other rocket members, pretty cool.

I don't have the resources to travel everywhere as other fans do. My family comes first in regards of time and money so I'll just see him again if he plays close to home.

I wrote him a couple letters. I got the surprise of my life when he answered me one of those sending me back 2 cd covers I sent him signed: To Isabel with love, Elton.

Wow!!! Then... which is your Elton's item that you really appreciate, for being hard to get or for the happiness you've got to have it?

I'd say my personalized autographs. I also have tons of bootlegs, dvd's and more than 40 t-shirts. My souvenirs from Vegas are very nice too.

Ok! Argentina was the only place where “Captain Fantastic” song was released as an “A” single… do you know if that was successful in music chart and sales terms? Is Elton very popular in Argentina? And which albums remains as the best sellers? 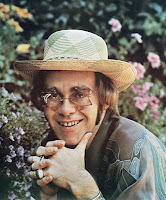 I can't remember about the chart position of "Captain Fantastic". But I can tell you that song was on the radio a lot when it came out. Elton is very popular in Argentina. He played both nights in one of the biggest football stadiums we have (River Plate) and there were nearly 80.000 people each night.

Great! Well, you know that is the week of “Rock Of The Westies” so, what is your opinion about the changed of the band, about Dee and Nigel being fired, and about the more rockish band?

Being a band "fan" I was very upset when Nigel and Dee were fired. I never really "connected" with the new guys. I was always hoping Elton would hire them back.

Me too… And remember the date when John Lennon, one of your favourites artists, was shot? How do you felt? Which are your thoughts about that sad day?

Actually, I was still living in Argentina at that time. I couldn't believe my ears when I heard the news. I was also a huge Beatles fan so was devastated. My dream about The Beatles getting back together someday was shattered. How could a crazy man kill someone as John Lennon? A man who ony talked about peace on earth? I remember crying a lot that day.

Tragic new, yes. And finally, could you tell me your five favourite Elton's songs in running order, for my AllSongsList?

This is a tough one, I'm sure I'm leaving tons of other great songs out but here I go:

I know, I'm cheating, sorry! I just can't leave some of these favorite songs out.

Don’t worry… thank you very much. Would you want to add some observation or suggestion, or something you want to say to other eltonites?

Can't think of anything right now. Probably don't get angry so much. Some Elton message boards are filled with rude and angry people. We should learn to accept what others think and like, instead of trying to change or impose on them. PEACE!

Oh, once you said “for me Pinky's more of a sentimental thing”… what has this song that don’t have the others?

I love Pinky. It is one of my favorites. I think it has a touch of innocence in it's lyrics. The whole breakfast in bed thing goes so well with that melody. Don't know why, I just love Pinky.

I am agree with you, yes. Thank you Isabel, really a pleasure to chat with you. Take care.
by Jackrabbit on 3:37 pm