Hi Latitude. Welcome to the “Thom Bell & Pete Bellote Sessions” Week. Nice to “meet” you and thank you very much for the acceptation. Really it was my intention to interview you because I always loved your comments and thoughts about Elton and I am so happy that you accepted. When I asked you to choose an album from a list, you said “(I would) like (to do) the "Thom Bell Sessions" week, because I love that album hugely”. Well, as you can see I made a pack between one of most eltonite’s hated albums, “Victim Of Love”, with the other one, “The Thom Bell Sessions”, which I think should have been an incredible album. Maybe it’s not a perfect mix but they were near in time and had the same characteristic: working with other producer than Gus Dudgeon.

But first... Could you tell us, please, who are you and where are you from?
My name is Charlene and I am from a small town in Maine, USA.

Ok! When did you become an Eltonite? Remember the first time you heard Elton's music and what moves you to buy his music?

I was working in a shoe factory in 1991 and playing the radio all day long every day. Then I heard this beautiful song called 'Sacrifice'. I didn't even know who's song it was, but I HAD to find out. Turns out it was Elton John! I knew next to nothing about him or his music. The image that came to my mind was this wild guy with hats and glasses. LOL. So, I kept searching for his songs on the radio and came across 'Candle in the Wind '87'. I loved it!!! 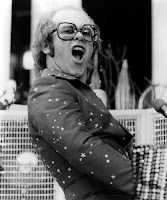 Right there I knew I had to buy an album of his. Frankly, at that time, I wasn't into buying albums by anyone at ALL. But, I bought GBYBR, and Greatest Hits. That was just the beginning. As to how his music made (and makes) me feel---it kind of feels like falling in love with a music. The feelings, especially at the beginning, ran very deep into my soul. I still (after over 16 years) get lots more out of his music then any other musician in the world (and his is the only music I buy). It's very hard to explain the feelings and emotions I get from his music.

I've been to 13 concerts and have tickets for another one on Feb. 28th (Floor 7th row on the left :D ). The first time I saw him was at Amhearst, Mass. in '93. An E.J/Ray show. I was thrilled beyond belief (and I was way up in the bleachers too). I became so moved that I cried with emotion quite a bit. I haven't ever sat in the front row, but I've walked right up to the stage. It was electric. The only way I have been in touch with him is by letter. I wrote a moving letter to him in '94, which I have a strong feeling that he read, and he sent me back a signed autograph on the 'Blue Eyes' single sleeve that I'd sent.

Great! Which could be a great set list, in your opinion? Is there any song that Elton hasn’t played yet, and you think that he should do it? And you prefer the Elton’s solo tours or better with band? With the same musicians as his current band or you miss someone of the past?

I don't want to go through an entire set list, but I'd like him to remove 'Philadephia Freedom' and 'Daniel' and add 'Chloe' and 'And the House Fell Down'. Another song he has never done live that I would love to hear is 'The Panic in Me' from the El Dorado album. It's impossible to choose between the solo shows and the band because I get different things out of each of those. When he's solo he takes it up a level on the piano, and does songs he'd never do otherwise. With the band, I love instruments, so I love hearing the guitars, bass, drums, etc. I definately miss Ray Cooper and John Jorgenson. One type of concert I haven't even seen that I would like to is with an orchestra.

Great! Well, you know that is the week of “Thom Bell & Pete Bellote Sessions” with Elton working with other producers and trying news sorts of music… What do you think of Elton doing disco? And why eltonites didn’t pay much attention to the Thom Bell Sessions and, suddenly, became a number one hit in England 20 years later? 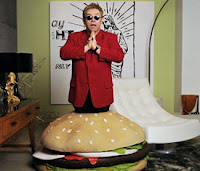 For one thing, he didn't release that at the time he recorded it. He thought it was too sweet. He didn't release it 'till somewhere around the 'Sleeping With the Past' time. I'm not surprised it didn't do well at that time. The disco he did on the VOL album really wasn't that good, but this 'sweet disco' of the Thom Belle Sessions was excellent, imo anyway. The song that became the no 1 hit was 'Are You Ready For Love?' Frankly, that is a great song, and apparently hit the right spot at the right time in England. Otherwise I have no idea. It sure made me happy that it did so well though.

Elton was in the Top40 of the US music charts for almost 28 years, since “Your Song” to “Written In The Stars” breaking one of the Elvis Presley records … Why do you think Elton fell to reach the singles charts, if he survived the 70s, the 80s and most part of the 90s? Also, he survived the “Bisexual” confession in 1977… Was really a shock, to the Americans of that time, this confession or the recent marriage to David has something to do with his poor sales?

There's so much diverse music out there now, and people aren't buying music as much. (They download a lot). The ones that do buy lots and lots of music are teens, and they are not likely to buy much of Elton John. I don't think the confession of the recent marriage to David has anything to do with it really. It's mostly these music times I think.

I see... Finally, could you tell me your five favourite Elton's songs in running order, for my AllSongsList?

This is not easy. The first three are fixed. The last two are interchangeable with other favorites, of which I have many many many of.

One observation I've made is that us Elton John fans are an intense, avid, passionate lot. We sometimes clash with our passionate opinions, but we must always remember the most important thing---that we are ALL die hard Elton John fans and that's the one common bond. Therefore, we all have great taste in music, even if we disagree on the small particulars. Basically, and in general, I simply love Elton fans. What a great bunch of people. :)

Oh, once you said “(we have) The right to choose for ourselves what to believe in, and it's not always going to be what we relieve” when you talked about religion… that’s really a wonderful phrase… but, and excuse me the question, do you feel uncomfortable when Elton’s talking about Religion?

Actually...no. I don't agree with him, but, as I said, he has a definate right to believe what he wants to believe, and his own free will. It's just none of my business what he thinks and believes about religion. For the most part I'm into him for the music, and he is the very very best, to me, as a pianist, singer, songwriter, and performer. And that's what I tend to zone in on.

Thank you very much Charlene, really a pleasure to chat with you. Take care.
by Jackrabbit on 3:36 pm