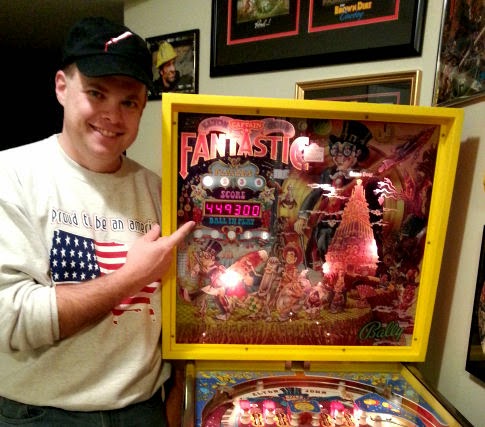 
20 March, 1970, Border Song is released as a single. Once upon a long ago, Internet changed everything. No borders to cross. Avid to find information about Elton John, I went to one of most surprising websites on the whole web world, then and now. That could be, if I am not mistaken, in 1998, when even Rocket official website was just a project. And I initially thought that could be an official website, but not. It was at ej.kylz.com, and today's guest promoted the whole thing, and it developed to a magnificient collection of Elton's items. Adding the words "Elton" and "Discography", we have more than just a catalog of Elton John albums, I could say, including lyrics, concert listings, books, discography throughout of the world: "The World Wide Web was changing the way people accessed information, so I decided to put my catalog of Elton John records and lyrics on the Internet for everyone to see.  That was 20 years ago, and now eltonography.com is still going strong to this day." David Bodoh, so, is the owner of the non-official most important website about Elton John, plenty of other details to satisfy the most demanding Elton John fan, collector,  and researcher, as it reads the statement.

"I was born in 1970, so the whole phenomenon of Elton John the Superstar passed me by as I was just a kid", begins to explain. "A girlfriend in high school liked his music, so I felt obligated to at least learn more about his music.  After picking up a copy of Greatest Hits, I recognized all the songs, but had never realized they were all by the same artist.  After that I started to slowly acquire Elton’s whole back catalog."  And he has becoming one of most prestigious collectors of Elton John items: "Because I was randomly listening to everything from 1970 to 1988, I had no sense of sequence.  It was not easy to keep them in order, so I decided to catalog his albums and lyrics on my computer. In 1992, I discovered East End Lights, and bought a copy of the Pete Dobbins Discography booklet.  I only had a fraction of what the book listed, but I knew what was missing, and went on to pursue more and more Elton records". And the collection grew more and more: "I have thousands of records and CDs from around the world.  He has been so prolific and popular in so many countries, it’s impossible to find everything.  But it’s still fun to search".  Everyone has his first eltonite experience, so I asked David's his: "My first Elton John concert was in Saratoga New York in 1989.  I remember that night he made a mistake halfway through “Candle In The Wind” and started the song over from the beginning!  Since then I have been to 27 concerts, many at Madison Square Garden – a great venue for Elton!  However I still prefer to collect Elton memorabilia more than anything else". Internet has given to him such incredible moments:  "I have made many friends through Elton’s music." Dave, it's your turn about your selection of tracks:

30. Billy Bones And The White Bird
The drums really drive the momentum right from the start.  This is not the Ancient Mariner your child may know, but it reflects distinctly Bernie’s interest in literature.  Check it out.

29. 5th Avenue
This out-take from The Diving Board was on Amazon before most of the other songs.  It starts with a simple rhythm, but the chorus really kicks in with sincerity and resolution.  So many other ballads leave me wanting that step-up, but this one delivers.  I actually like it more than most of other Diving Board sessions.

28. Simple Life
Despite the drum machine beats on “The One” album.  But Elton is locomotive strong on this one.

27. All The Girls Love Alice
The reverb intro gives you the immediate sense this song is a counter-culture wink-wink.  Just like so many Elton/Bernie tracks from the golden era, the songs evokes vivid imagery through storytelling. Love singing along to this one.

26. And The House Fell Down
Elton went to town with this chapter from his bio.  He never takes himself too seriously, and it shows clearly here.  The piano keys dance up and down, right along with the rollercoaster of moods felt in the song.  Love the creepy backing vocals.  We’re all still waiting to hear this one live in concert.

25. Captain Fantastic
The title track from an era when Elton could do no wrong.  The simple guitar intro reflects the naïve origins of Elton and Bernie’s partnership.  I like how each instrument is incrementally added throughout the song, building up to a powerhouse of a song fantastic.  Captain he is.

24. Burning Buildings
A really good use of consonance in this one: sweet sensation, lovers leap, hard knocks on my heart.  The melding between lyrics and melody is flawless.  And Elton’s vocal delivery is powerful and felt.

23. Club At The End Of The Street
The whole Sleeping With The Past album is cohesive and feels like a collected set of songs that belong together.  This song is just fun and reminiscent of 1950’s carefree living in America.  If I had to peg a song that exemplifies Elton’s trademark tone, I’d pick this one.

22. Crocodile Rock
This one is just fun. I really wish Elton still had this kind of vocal energy on his recent albums.  Definitely gets you up and moving around.  I think Dee’s base line makes all the difference in this song.

21. Believe
Powerfully haunting track from an underrated album.  I remember listening the first time, wanting the chorus to pick up the pace and take on a more heavy rock flavor, but it’s grown on me.  Especially the strings and orchestral work.  It stands strong as it is.

20. The Greatest Discovery
Perfectly portrayed from the perspective of a young boy welcoming his infant brother into his life.  The imagery is so innocent and stark, it draws you into the scene.  Paul Buckmaster’s arrangements help you forget everything else for that moment.

19. Harmony
A charming and beautiful ode to music itself.  What better way to close the lid on the Yellow Brick Road album, but with a song that proves every track is stellar all the way to the bank.

18. Healing Hands (eltone remix)
There was a 12-inch remix of this song pressed in UK and France only.  It’s a driving, anthemic rework, with a female front vocal that takes it to a new level.

17. Madman Across The Water
Another visual narrative, where the madness is heartfelt.  The manic highs and lows, the clarity and the clouds.  Take my word, my mind can really take it.

16. Lord Of The Flies
Oddly, this campy out-take from Leather Jackets has not seen daylight since its 1986 b-side vinyl pressing.  Another Taupin ode to classic literature.

15. Sad Songs
This was probably the first Elton John music video I saw on TV.  Singing a song about singing songs is nothing new, but it’s fun to tune in and sing along.

14. Better Off Dead
You can’t go wrong with any of the Captain Fantastic album tracks, but this one stands out for the harmony vocals.  Props to Davey Dee and Nigel.

13. Honky Cat
Dearly love the sweeping horn section on this diddy.  You can tell everyone playing here was having a ball honky-tonking all the way from the farm to the city.  Almost feels like each instrument is playing pieces of a song, but all put together it meshes fantastically.

12. Take Me To The Pilot (live in Australia)
I know there are fans who claim this song is overplayed in concerts. But it’s a wonderful showcase for Elton’s vocal-piano interplay.  Put the orchestral arrangements on top of that, and it’s a powerhouse rock-n-roller with gospel highlights.

11. I Don’t Wanna Go On With You Like That
This was Elton’s current hit when I first became a fan.  As far a preferring upbeat tracks on his albums, this fits that pattern nicely.

10. Levon (live from Radio City Music Hall 2004)
The entire Madman album is simply wonderful, and I would pick this track slightly above the rest.  But the way it was arranged for the 2004 orchestral/choir show in New York took it to a whole new level.  Thank you James Newton Howard.

9. Rocket Man (Inertia’s Dark and Twisted Mix)
A groovy and psychedelic dance club rework on this classic track.  Really hits the mark in a dark room with laser lights.  Some people don’t like to mess with perfection, but put that aside, and enter a realm mixing old and new styles.

8. Hey Ahab
I like the effect of both pianos starting as almost independent melodies, wandering, searching.  Then, bam! they find each other and syncopate and never let go.

7. A Step Too Far
The entire Aida project is sadly under-represented by the all-star CD collection.  Collectors who have the original Elton John demos are still scratching their head on why they’re still unreleased.  But aside from that, there are a few trio versions of this song, all performed beautifully.  A real testament to the artistry of Elton John and Tim Rice.

6. Have Mercy On The Criminal
You gotta believe that Bernie was inspired by some news report about an escaped convict, and how he was treated when he was found.  I never actually read that, but I could believe it.  The song eerily evokes the desperation of conflict with human rights.

5. Mona Lisas And Mad Hatters
A country-infused melody that draws a contrast with the woes of city-living life.

4. Funeral For A Friend/Love Lies Bleeding
Elton should open every live concert with this track.  A true rock band jam that showcases the guitar, bass, piano, drums and backing vocals to a perfect concoction of sound.

3. I’m Still Standing
Great uptempo tune that fits squarely in the heyday of 1980s pop.  Though the lyrics refer to surviving a breakup, it’s grown to become a testament to Elton’s longevity as a rock icon with an ironclad work ethic.  Hoping he continues to stand for many more years.

2. Empty Garden
I don’t know how many times I listened to this song before learning all the references to John Lennon, Madison Square Garden, New York.  A heartfelt homage to the life and loss of such an iconic figure.  The heavy emotion is felt in every line.

1.  We All Fall In Love Sometimes/Curtains
Completely simple and sentimental.  Nigel’s drum fills are just enough.  Amazing how far they’d come since writing such childish songs.  The best part is the climax, where all the instruments align in unison (just like us) and establish a pace for the road ahead.  My favorite version is the rock-extended jam played live.  As an aside- has Nigel ever played this one with Elton live on stage?  He deserves to.

Picture courtesy of Dave Bodoh
by Jackrabbit on 3:47 pm