Hello Eltonites!!! Today is a special date. We have one of the greatest eltonites we could find outthere. He has a fansite, a great and well designed fansite. You could share your thoughts and comments with him on the forums. Ladies & gentlemen, from Austria, the one and only: Wali80!!!

So thank you for the acceptation, really a pleasure to have you... Could you tell us, please, more about you?

First of all, thank you very much for the invitation! It’s a great pleasure for me to do this!

My name is Thomas, I’m 18 years old and I’m from Austria in Europe!

I probably heard Elton’s music very often when I was very little, because my dad was and still is a huge fan too, but the Elton fever finally caught me in 2001, when I first listened to the One Night Only concert and the “Songs From the Westcoast”-album. I started to think, ”Who is this guy? Who makes this awesome music?” and I looked him up and there he was, Elton John! At the beginning it was all about his music. I began to listen to more and more and became a fan of his music. I knew nothing about the person Elton John. But with the years I started to think of the guy behind the music and now I know a hell of a lot about him and of course his band.

Great!!! What was it like seeing Elton for the first time and how many concerts have you been? For you, which member of the band is (or was) irreplaceable? Miss someone, now? 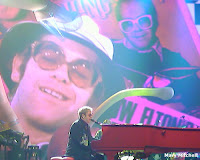 I saw Elton seven times live in concert. The first concert was in Las Vegas, The Red Piano Show in 2008. It was just amazing, to see him perform. You know, there is this crazy music at the beginning of the Red Piano show and first of all the Band comes in. I was totally crazy about seeing only the whole band in person, Elton was not on the stage and I nearly became a heart attack..=D… and then Elton came and it was just amazing, it blew my mind. This guy, although he is small, has so much charisma and he seeds it in every venue he is playing.

Of course, I still miss Guy Babylon. I saw him in concert 4 times, and he was a pure genius. I’d like to see John Jorgenson back in the band, not only as competitor for Davey, but for his awesome Saxophone skills.

My favourite guy in the band has to be Nigel!

I thought a lot about this before and the first thing I would ask him is, if he could give me a hug. It must be an amazing feeling, to get a hug from the person you admire so much and that means so much for you, so I’d definitely ask for a hug first, and then ask, if I could play a song with him. I play the piano too, so a kind of Face2Face (with only Elton singing – I can’t sing) would be awesome.

Maybe this dream will come true this year. Elton will play 2 times in my home country this year, and my dad knows some of the hosts of the concerts and could get me some backstage passes. But we’ll see.

Hope so! Which is your Elton's item that you really appreciate, for being hard to get or for the happiness you've got to have it?

I have 2 autographs by Elton, that he signed on stage for me and one that he sent via mail. It’s a nice thing to have, but not too important for me.

And how was the success of Elton John in your country? Which references had austrians about Elton, specially in the 70s and 80s? And the most succesful albums? Could you still hear Elton´s music now on radio stations?

I don’t know a lot about this, because I was born in 1991, but I’ll try my best to answer it. I did some research:

Captain Fantastic and the Brown Dirt Cowboy was the first album of Elton in the Top 10 in Austria, it got to Nr. 7 in 1975.

Songs from the Westcoast in 2001 was the last album that reached the Top 15 here.

Most of his singles didn’t reach any position in the charts.

Most successful were of course Candle in the Wind on Nr. 1 and Don’t let the sun go down on me was Nr. 2.

In the radio you can hear 4 songs very often: “Candle in the Wind”, “I’m still standing”, “I don’t wanna go on with you like that” and “Circle of Life”!

Fantastic!!! What do you think about the new project with Leon Russell? What could we expect about this album? And about T-Bone Burnett as the producer?

I think, that we should be happy, that Elton is still composing and working that hard, to produce a new album. I’m really looking forward to this and I just read that it will be released on October 19. We should not expect too much and we should not compare the new album with his most successful albums. Leon Russell and T-Bone Burnett really sounds good to me. Sounds like good music and good promotion. I hope this will bring back attention to Elton’s music.

www.eltonnewsblog.com is one of the best designed Elton sites on the web, in my opinion, for sure. I particularly like the "YouTube of the Day" section! That’s a great idea. What else we could find on the website, Thomas?

First of all, thank you very much for that compliment! I appreciate that!

I started the page in January this year and we’re leading to the 2000. visitor in the next days!

On my page you’ll find the latest and most important Elton News and many other “features”. We have an awesome Bootleg Guide, which shows you most of the bootlegs available. It tells you about the bootleg, the setlist and information where to buy it. Then we have an awesome blog called the “Don’t forget the lyrics…”-Blog, which focuses on the wonderful lyrics by Bernie Taupin. We explain some of those lyrics and backgrounds of the songs there.

We have so much to offer and I would recommend you to just visit the page and explore it! I’m so thankful that a lot of Elton fans did and still enjoy the page and visit it that often!

For a fansite, the feedback is very important. How could we be part or collaborate with eltonnewsblog?

We got a lot of Feedback, saying that the page is awesome. It’s not easy to make something better, that is already good. I still try to make it better.

It would be just awesome, to get more articles, by other Elton fans.

You know, I’m a big fan of your page, because the “Eltonites” section is a project, that concentrates on the fans. So I would love to get some fans, to write me about their experiences as an Elton fan or concert reviews. It should be made by fans, for fans!

In my opinion a bit more interaction would make the page better.

So if you like, please send us your stories or whatever you want! We’ll publish it. You can find my contact email in the HelpUs! Section on my page!

Also: Thomas, what’s the “A Book For Elton” project?

Thank you for asking about that! It is a project, I started some weeks ago.

We are sending a blank book to Elton fans all around the world. Everyone who gets the book can design a page. You can paint a picture, glue in a photo, write a poem ect.

You can do whatever you want to do on one page in the book! And at the end it gets back to me and I’ll send it to Elton.

I think this is such an awesome project, and I just got the photo of the first artwork.

You can find more about the book here: http://www.eltonnewsblog.com/The_Elton_John_News_Blog/BookWelcomepage.html

And all the artworks and a picture gallery here: http://www.eltonnewsblog.com/The_Elton_John_News_Blog/Photos.html

Nice project!!! Apart from music, which are your interests? What you like to do with your off time?

I’m at school and taking my final exams in May and June. I enjoy meeting my friends, playing soccer and biking, but my main hobby is music and I play the piano and drums.

3.Take Me To The Pilot

4.Something About The Way You Look Tonight

I want to say, that it was a real pleasure to talk to you and my honor, to be on your website! Furthermore I wanna excuse for my long answers.

And please Elton fans, don’t just think about the person Elton, but think of the awesome music he has given to us too!

Oh, it was so interesting for me to read your answers, really. Thank you very much Thomas. A pleasure to chat with you. I get funny doing this interview with you, it was an enjoyable and worth experience. Keep Well and good luck in your projects.