Hello eltonites!!! We are all like a family. For me, is quite difficult to choose eltonites to be the guest on this section. Thank God there's a lot of eltonites about interesting things to say. We will continue because for me it's a great and funny way to learn more about Elton. Today, we have one of those fantastic people. I've never met an interesting and funny girl like her. She's from Germany and she knows a lot of things related to Elton. I am a fan of her comments about him. Please, people, a big applause to this lady, the fantastic, the incredible: Ulrike Scherling!!!!

So thank you for the acceptation, really a pleasure to have you... Could you tell us, please, who are you and where are you from?

My name's Ulrike, I'm from Frankfurt in Germany, btw the town where Elton's first concert in Germany took place, which makes me a little proud, even when I was only one year old back then. Working for a phone book publisher now, but am a trained book seller.

Right! When did you become an Eltonite? Remember the first time you heard Elton's music and what moves you to buy his music?

To be totally honest with you, it happened sometimes around Halloween last year, when I did "I'm Still Standing" karaoke and felt the urge to get more of Elton's inspiring music. The Greatest Hits I had owned for the last ten years became my best friends for weeks (then I started to buy albums like my life would depend on it)

Inspiration's exactly what moves me to buy his music (and not only the music). Inspiration, excitement, wondering how the heck melodies like that just seem to float out of that guy. Plus as a huge Alice Cooper fan as well I was amazed to find out that their Seventies output had some things in common, and they seemed to see each others as inspiration.

I have no idea when I've heard my first Elton tune. When I was younger, on German TV there was no floating balloon without "Song For Guy", i didn’t know about Elton back then. But for ages I considered "Your Song" the most beautiful love song ever written, and "I'm Still Standing" is my personal "I Will Survive". I assume it was only a question of time.

And what was it like seeing Elton for the first time and how many concerts have you been? And, for you, which member of the band is (or was) irreplaceable? Miss someone, now?

I'll answer this question about two months from now, after I will've seen Elton for the first time live. But I can't imagine it will be anything short from a magic experience. About the member question - I'm a fan of Nigel, however he was replaced several times, so I think Ray's craziness can't be replaced. Missing? That's one of the fascinating things: The "outside world" thinks Elton is a one-man-show, but knowing now there's Bernie and the band, I miss Dee and Guy like I would've seen them live countless times.

Yes, me too!!! And how should be your dreamed concert? And which one of Elton's live shows you thought you should be there, if you could, even back in time? 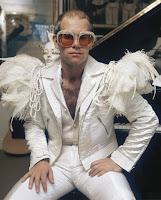 O dear. Right now every concert feels like a dream. A dream concert would probably take place sometimes in the Seventies, because I love young Elton's voice with the falsetto. With more songs from "Rock of The Westies" and stuff like Meal Ticket, The Cage, Empty Sky, some of the rough stuff. As for the live show I'd love to have attended... I think it's a tie between the legendary Dodgers Stadium concert and Central Park 1980.

Wow!!!! And what would you do if you meet Elton sometime? What would you talk about and which question would you like to ask him?

Apart from making myself look like a complete lemon? Actually I think I would try to talk about "Him And Us", the TV show he tried to make some years back, with the great Anthony Head playing his alter ego, Maxx Flash. Alas there never was more than a very promising pilot episode and I'd love to convince Elton that he should try to find a TV station willing to produce the show, with this wonderful humour and the songs Elton has written exclusively for it, and Elt himself being in every single episode.

In the unlikely case I should meet him, I hope to come up with a more intelligent question than asking him to take off his glasses (which I most def will NOT ask), because I'm a little fangirlish about his eyes.

Hahahaha!!! Which is your Elton's item that you really appreciate, for being hard to get or for the happiness you've got to have it? 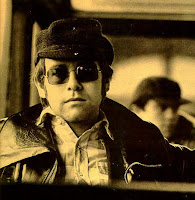 Right now there are more things I'd love to have than ones I've already got. I think, when it makes Elton-like sounds I really appreciate it. At the moment my favourite piece would be the poster hanging in my bedroom. The Seventies one, where he's wearing the jeans overall with the fox tails. Every female fan seemed to have it back then. Makes me feel a bit being part of the pack. ;-) Oh, and then there's the Central Park video. The tape is already worn out a little, o dear.

Well, you know that’s the Week of 1995, the Week Of Made In England. Which is the standout of the album and what do you think about Greg Penny’s production?

The title track is pretty awesome. Not a friend of power ballads, but 'Believe' has that lovely spread-your-arms-and-sing-along-with-passion feeling. Right now I think my vote goes to 'Pain'. It rocks in a good old-fashioned way. Though personally the production is a bit too clean for my taste.

And what do you think about the new project with Leon Russell? What could we expect about this album? And about T-Bone Burnett as the producer? You know any member of Elton’s band were in the recording process. Any rejection?

Well, this will be my first really new Elton album, so I'm quite looking forward to it, being a bit anxious, too. As a newbie I'll rather bite my tongue than having opinions on the production team. But I would've loved to have the band on it. Me like the band.

Ulrile, apart from music, which are your interests? What you like to do with your off time?

I love animals, especially my dog Jessie who has spent the last months in a world becoming more and more Eltonverse. I'm a huge fan of The Simpsons since the beginning, also love Buffy and Doctor Who. My first love are books, love reading, especially books by Jasper Forde, Erich Kaestner and Gabriel Garcia Marquez. When I'm not reading, I'm drawing and painting, also working with graphic programmes. I love being creative though I'm not exceptionally talented. And travelling to London, my favourite place on this planet.

Mine too!!! Finally, could you tell me your five favourite Elton's songs in running order, for my AllSongsList?

You have no idea what you're demanding from me right now. OK, I'll try.

I never had any idea how many different people are united in their love to Elton John's music. You know the clichés of only bored housewives listening to his songs. I've met some really cool and lovely people this way. And I hope those fans who have seen the light ages before I did (I envy you) won't take offense that some newbie like me already has an opinion. ;) Eltonites do rock!

Thank you very much Ulrike, really a pleasure to chat with you. Very interesting things we talked on. It was an enjoyable experience for me. Take care
by Jackrabbit on 1:35 pm