Hello Eltonites. I am so priviledged to present you a very special fan. I've meet so passionate eltonites, she's one of those. Loyalty is her word. The doors of allsongslist are wide opened to receive a very wonderful woman, a very enthusiastic fan. Hello my friend, thanks for being here. Could you tell us who are you and where are you from?

OK! When you became an Eltonite? Remember the first time you heard Elton´s music and what moves you to buy his music? 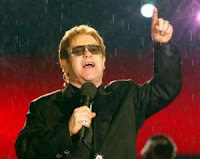 I discovered Elton in 1993 seeing the video clip of The One. I remember that I was breathless, watching TV, my heart pounding, a real "love at first sight"! I was 13 and since then Elton has always been with me! I started to buy 2/3 albums at a time and listening to his songs, I entered in the beautiful world that's his music! Now, I have all his albums but every time, I am still feeling like the first time.

Nice!! What was it like seeing Elton for the first time and how many concerts have you been? Have you even been front row? And also, could you tell us if you ever have been in touch with him?

I saw the first concert of Elton in Milan in 1998, was the eve of my 18th birthday :)... Then, since 2001 I have really seen many concerts in Europe. Paris, London, Divonne (beautiful place!) as well as obviously in Italy. I happened to be several times in front of the stage ... and see Elton closely is always very exciting! Unfortunately I never met face to face. Last December I sent him a Christmas card and the cover of Tumbleweed Connection (my favorite record!!!) A few days later I received back the cover with a dedication and his autograph !

And which songs do you think Elton should add to his current set list, and what would it be life if Elton suddenly played a song that he has never played live? And your favorite live songs to be on? And, for you, which member of the band is (or was) irreplaceable? Miss someone, now?

Well, there are many songs I would like to listen live... a beautiful among all EGO that he doesn't sing for years, MY FATHER'S GUN and TOWER OF BABEL. My favorite live songs are MADMAN ACROSS THE WATER, INDIAN SUNSET, GYBR, BELIEVE and then, for sure, THE ONE!!! I love the EJ Band! Special for me is Nigel Olsson I had the pleasure of meeting him in person backstage at a concert by Elton in London several years ago. Couldn't forget Guy Babylon, his memory will stay forever in my heart! Now, there's Kim Bullard that many say he's brilliant and I can't wait to hear them with my ears :-)

Great!!! Which is the most foolish thing, or incredible thing, you did for Elton, if you did it? 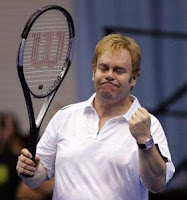 I have made a lot of crazy things for Elton! I particularly remember a concert in December 2002 at Shepherds Bush Empire in London. My friends and I had got the tickets after an exhausting auction on Ebay. Unforgettable concert, fantastic place! The stage was very close and I had Elton in front of me during the show!Amazing!!! The next day we were at the airport, in line to check-in but the desire to see him again was too strong. So we left our luggage stored in the airport, finding miraculously the tickets for the concert that evening and we returned to Shepherds Bush! We no longer had the hotel, so we stayed the night at the airport ... exhausted but happy!

What you would do if you meet him sometime? What would you talk about and which question would you like to ask him?

I hope someday I would be able to meet Elton in person, but I would not bother him with my presence, If would be, I hope it happens in a simple way. Sure, I would like to ask to him how he feels during the concerts and what he thinks, while he sits there to sing in front of us and we cry for him! A curious question isn't it?

For sure!! What do you think about the new project with Leon Russell? What could we expect about this album? And about T-Bone Burnett as the producer?

I am very curious about this new record. I could hear the new song "Never Too Old" and I think it's really very nice! I do not know very well T-Bone Burnett, but I read enthusiastic comments about him as a producer. Well, we'll see.

Which is your Elton´s item that you really appreciate, for being hard to get or for the happiness you´ve got to have it?

A Tour book of few years ago that was given to me by a person who will always be very special for me!

I love cinema, art and I like to learn about different cultures. In my free time I like doing sports, walking and reading thrillers.

Finally, could you tell me your five favourite Elton John´s songs in running order, for my AllSongsList, please?

“Talking old soldier”, The One”, “We are fall in love sometimes”,“Roy Rogers” and “Believe”.

Thank you very much, Silvia. It was so nice for me to have you here. Thanks for sharing your time with us. Take care and a big hug!!!
by Jackrabbit on 5:08 pm