Hello Dear Eltonites!!! I am pleased to invite you to the third season of AllSongsLIst!!! This season come with a lot of news, changes, and so on. With will have time to explain it. I would like to open the season, as always in fact, with an Eltonite's Day. Eltonites are very important for me, so I thought it would be nice to invite one of us to be the opener of the season. Well, here, on my side, a true eltonite. She's a sweet person, she joined on elton's community fans in the 90s. Please, everyone, an applause to: Laura Taylor!!!!

First of all… Could you tell us, more, who are you and where are you from?

My name is Laura Taylor, I live in a town just outside Edinburgh called Kirkcaldy.

I think it was when I was about 9 when the Lion King film came out hehe and I overplayed Can You Feel The Love Tonight. When I grew up I got heavily into artists who played around the 60s-the end of the 70s, mostly Elton and David Bowie.

Perfect! What was it like seeing Elton for the first time and how many concerts have you been? And also, could you tell us if you ever have been in touch with him, get a signed autograph or even, speak with him or with other member of his band?

I've only been to one concert so far, it was for my mum's birthday. It was amazing. My sister, stepsister and mum all went in pink wigs and Elton T-shirts that I made, during the concert he said 'love the pink wigs girls'. I immediately texted everyone I know! I felt so famous! And everyone at the concert came up and took our photos, so did the Elton John photographer and the local news photographer.

Great!!! Which could be a great set list, in your opinion? Is there any song that Elton hasn’t played yet, and you think that he should do it? And you prefer the Elton’s solo tours or better with band? With the same musicians as his current band or you miss someone of the past? 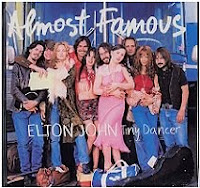 Any set list that had the songs 'Tiny Dancer' because I absolutely love that song and like to think of myself as a tiny dancer hehe. I like a lot of his early work, I love all his songs so it's hard to choose. I love the fact that when I went to see him he didn't take a break halfway through. That is true staying power! it was like 3 or 4 solid hours!

Do you like duets, or prefer an Elton “Duet For One”? In that case, which song and which partner have Elton to duet with? Which Duet have not to be happened? Do you detested anyone?

I'd love if he did an album with David Bowie, but I might actually explode with joy if that ever happened!

How it was, and still is, the success of Elton in your country? Which have been his hits in sales terms? And which are Scottish's favorite Elton's albums or songs? And could you still hear Elton's music in the radio, nowadays?

I think he is huge in Scotland and the whole of the UK really. But maybe I just think that cause I like him!

OK! What do you think about next step Elton should do? Recording an album with new material? Doing more musicals?

Bring out lots of new songs and keep doing what hes doing!

Exactly! Which is your Elton's item that you really appreciate, for being hard to get or for the happiness you've got to have it?

I love any old vinyl records of Elton :)

Yes, he rules. Thank you very much Laura. I really enjoyed this interview with you. Thanks for sharing your time with us. Take care!!
by Jackrabbit on 11:50 pm