Jack Rabbit In London: When A Dream Comes True!!! 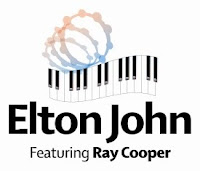 SPECTACULAR! EMOTIONAL! UNFORGETTABLE! UNBELIEVABLE! All this words came to mind when I was at Royal Albert Hall recent Tuesday for the Elton John & Ray Cooper Benefit Show for the Royal Academy Of Music. The cause "so close to (Elton's heart)" was to raise money to buy a 14 tons with 2,921 pipes organ for the Academy. "I never thought I'd do a concert to raise money for a new organ" joked Elton.

Jack Rabbit's adventure in my loved London began when I arrived to the show. I took a walk to the venue and when I arrived, I saw a van delivering flowers (very beatiful flowers!) for the guest. "Do you know if Elton's gonna be rehearsing this morning, Sir" I asked to one of the members of his crew. "No, he may do it on the afternoon". "Wow!" I went to the Box Office for my Rocket Tickets and the girl on the box told me they have no notice about my tickets. "Sorry?" I was surprised! She told me that she was "so sad for me" and I had to be aware about buying tickets on internet. 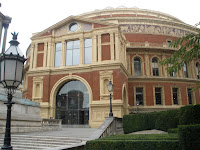 "But I bought it on the official website!!" I went out, so worried, imagine if I was so worried that I started walkin' through Hyde Park, Memorial Lady Diana Walk, Oxford Street, Picadilly Circus, Trafalgar Square, Big Ben and Houses of Parlamient, Westminster Abbey, St. James' Park, Buckingham Palace and Hyde Park again, all in one walk. I was only thinkin' "Should it be possible to be here and could not see this show? Could it be a bubble? A fraud?" I had no lunch, only a shower, changed clothes, and went to Royal Albert Hall again at 4 p.m. At the Box Office, and I asked to other woman there about my tickets and she just said: "Oh yes! Be in at 6:00 p.m. and you could get your tickets". "Wow" I almost kissed her. I explained she what happened in the morning and she apologised. 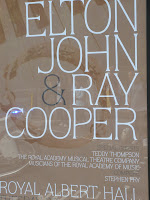 They let me be in the rehearsals but without seeing the stage, just listening, and what I heard was unbelievable: "Emperor's New Clothes"? The songs he was rehearsing for almost one hour were so new, some of them he hadn't played before, some others he didn't performed since a long time. Elton linked the songs without even stoping. I have to tell you sincerely, Eltonites, that not me as not many of our Experts Committee, thought about the incredible set list Elton was preparing for that event. IMPREDICTABLE ELTON! I thought! Elton concreted the rehearsals in the new songs he was to play and Ray Cooper just joined rehearsing for two of the songs: "Better Off Dead" and "Indian Sunset". 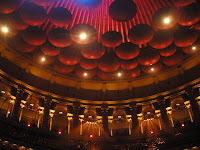 A walk to the Stage Door let me be in touch with Clive Franks, Elton's sound engineer. "Hello Clive, nice to see you again". "Hello, welcome to the show" he said to me. He's a nicest person, always smiling, we chat a little and when he left me I told him: "See you In Barcelona, Clive". "I will be there!" he smiled. The surprise was to see Ray Cooper on the hall signin' autographs. I am not sure, but what I thought is that he was lost, he was in the wrong direction and suddenly he was in front of fans. A tumult of fans went to him and he was so polite, but when he could he left the hall promising to "come again". Uppss!! He's a lovely person, a very polite person, and a genious (obviously). With me tickets on hand, I went down to the arena, row 8, seat 9 in front of Elton's piano. "Wow!! I'd never been so close to him" I thought. And maybe I won't have the occasion again.

The 5 hours show started with a great performance of the Royal Academy Of Music singers, choir and musicians, tributing Elton's musicals with those beatiful medleys of:

Sail Me Away
I Want More
From The Dead (Finale)

Teddy Thomson came to the stage at 7:30 p.m. performing his own set, and then it was an interval of 20' minutes before the magic event. Merchandise included T-Shirts, Tour Book Programme and Mugs. There were notices at the venue that the show was being recorded so we can hope for a blu-ray and DVD release. No flashes during the performace. 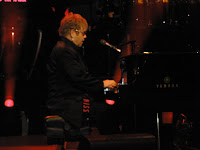 Elton appeared at 8:30 to deliver one of the most memorable performaces in a long time, wearing a scarff with the legend "Stardust Kiss. Elton John". 32 songs in three hours show. "Wow!!!" He sat at the piano and begin with the recent solo set list songs. The sixth song was "Emperor's New Clothes" and everything took a new meaning. Four songs from the "Songs From The West Coast", a justice to his last masterpiece album; in my opinion, of course. He was in a good mood, explaining some of his songs: "10 years ago something shocked me" he introduced the twice rehearsed "American Triangle", and continued "Bernie couldn't resist to write a song about it", "What a beatiful song" I shouted. He remembered "an angel, a genious and a fabulous man" Guy Babylon on "Blues Never Fade Away", dedicating the song to him and people who died to soon: "(...) And it happens when I lose my keyboard player, few weeks ago" he said. 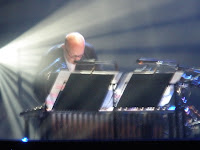 When Elton started "Funeral For A Friend" a long shadow of a calb and thin man with dark glasses appeared behind his percussion kit, and people gone crazy. Ray Cooper delivered an extraordinary performace, with a lot of percussion resources, and with the duck call he used in 1974 shows. People loved it! When Elton did "Carla Etude" I was so expected about the next song he linked with, because "Tonight" was played, and the surprise was "Blessed". "Blessed" after when Elton would not be able to adopt a 14-month-old Ukrainian child because he was too old and isn't traditionally married (My God!! What injustice!). 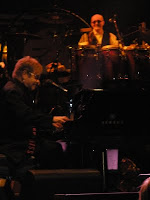 An extended and frenetic version of "Crazy Water" ended the show, before bass drums, congas and cymbals got whacked "Saturday Night's Alright"'s encore. With the promise of more shows with Ray Cooper next year, because "is so enjoyable to play with him", Elton and Ray embraced and the whole venue applauding until exhaustion. Ray touched his heart so many times, referring to Elton.

The Set list, without the old the same hits, eltonites, was:

What an emotional night! Doesn't matter if Elton forgot one or two lines on "House" (he did perfectly on rehearsals). After three hours concert we all agreed: "That was an unforgettable show" and could not miss the following ones with Ray.

A loving reminder to AnnaBCN, Montserrat, Linda, John F. Higgins, James, the girls I've met in Munich last year, Gro from Norway who was on my side at the concert, the boy from Australia (couldn't remember your name, sorry!), and also the man and the woman from England, the man who went first to Ray Cooper when I shouted "Ray Cooper!!" I followed him, of course. 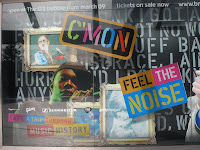 Oh, I would like to thank Midnight Creeper, from Hercules MSB, for noticing me about "The O2 British Music Experience", I went there and I loved it, although the shop in there had not any Elton items to sell (I made a complaint, I couldn't believe it because Elton's an icon in England). And sorry Jamesm, I couldn't come to Watford, although I would like it. 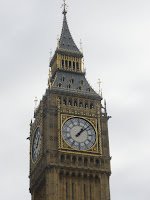 My flight landed yesterday midnight in Barcelona, but my heart will always be with London and my nicest memories to the Royal Albert Hall event. Oh, what's next? hahaha
by Jackrabbit on 2:56 am

Thanks for the wonderful review!!! :) What a show!