The Story Behind "Dove Of Peace" 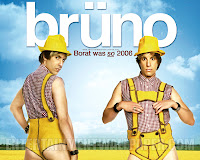 On Sacha Baron Cohen's last movie, Bruno, he is a gay fashionista who is the host of the top-rated late night fashion show in any German-speaking country… apart from Germany. His mission is to become the biggest Austrian celebrity since Hitler, and his strategy is to crisscross the globe in the hopes of finding fame and love. Not only this, also Bruno attempts to seduce a onetime presidential hopeful, adopts a black African baby and provokes a near riot at a caged boxing bout in Texas.

Over the closing credits, Bruno releases a brilliantly cheesy but subversive single, "Dove Of Peace" which mocks the charitable concern of Band Aid, and he invites celebrities like Bono (from U2), Elton John (playing also the piano), Snoop Dogg, Chris Martin (from Coldplay), Sting (from The Police) and guitarist Slash from Guns n' Roses. The track had already been part-recorded in the legendary Abbey Road Studios. "Chris Martin was in stitches throughout the recording and only just managed to get his lines out," a source told the Mirror.

We need to rid the world of hunger
I'm just like Bono except much younger
He is only nineteen
Ich bin Brüno, dove of peace