The Story Behind... Caribou Ranch!!! 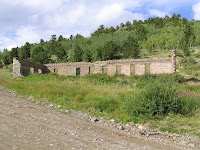 Caribou is a former silver-mining town, now a ghost town near Nederland in Boulder County, Colorado, United States. It was named after the Caribou silver mine nearby. Known as "The Place were winds were born", Caribou is located at 9800 feet. Sam Conger was the discoverer of the Caribou mine. He found out from the Araphahoe indians about their "Treasure Mountain" but was unable to search until they were moved by the government. Thriving silver mining town of 5000 persons until epidemics, fire and silver busts broke the town in the late 1800's. The Caribou Ranch recording studio is several miles away, on the road from Nederland up to Caribou. Nederland is a scenic mountain town in Boulder County, Colorado.

Before it gained fame as a destination studio, it was the largest privately owned Arabian stud farm in the country. Moreafter, and known as the Lazy VV ranch, the ranch was a destination for celebrities and made history long before its '70s recording-studio days. It became world famous, with Warner Brothers filming three short documentaries there, including Arabians in the Rockies, a 1945 short showing the ranch and its horses in glorious color.

Jim Guercio, then the producer of Chicago, bought Caribou Ranch for a reported $1 million in 1971 and installed the studio in 1973. James Guercio first saw the Rocky Mountains in the '60s, while touring as a guitarist for Chad & Jeremy and fell in love with the place. The first music recorded at Caribou was Joe Walsh's "Rocky Mountain Way". In addition to Chicago (starting with Chicago VI), the studio has been used by numerous other artists: Elton John, Billy Joel, Rod Stewart, Carole King, Stephen Stills, Waylon Jennings and Supertramp. 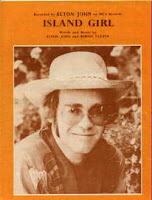 Caribou Ranch gained additional prominence when Elton John recorded his album “Caribou” there in 1974. Kenny Passarelli remembered “Elton John came to Caribou for the Caribou sound - a sound that was like no other sound in the world, and "Caribou" was all written here". Yes, during January of 1974, Elton and the band were at the Caribou Ranch, Colorado for the recording of: "Don't Let The Sun Go Down On Me", "The Bitch Is Back" and "Cold Highway". Unfortunately, no one had taken into account the totally different process of recording an album in America. It took precious days at Caribou to adjust to the studio unfamiliar monitor system. Repeated technical hitches threw Elton into a bad mood lasting a day and a half: "I want to take it to the highest f***ing mountain on your f***ing ranch and push it over". Finally, Elton John recorded several other classic albums at Caribou Ranch, including “Captain Fantastic & the Brown Dirt Cowboy” and “Rock of the Westies”. Also it was there when Elton was simulating to play a guitar, an instrument he is just starting to pick up. 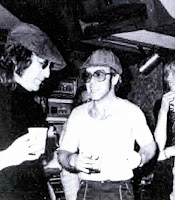 He also recorded the Beatles’ song “Lucy in the Sky with Diamonds” with John Lennon there, who used the pseudonym Dr. Winston O'Boogie, and also "One Day (At at Time)", the original of which John Lennon released on his Mind Games. Being in the studio, it was a nice break for Lennon, particularly because the U.S. government was trying to have him deported for his antiwar stance. The Caribou staff made Lennon feel at home, and Elton wanted to be sure that John had fun. And he had.

Neil Sedaka also spent time at Caribou ranch during the planning of Neil's first American release on Rocket. And songs of Billy Joel's album "Turnstiles", 1976, were initially recorded at Caribou Ranch too with members of Elton John's band, and produced by James Guercio, but Joel was dissatisfied with the results. The songs were re-recorded in New York, and Joel took over, producing the album himself.

The studio was in operation until it was damaged in a fire in March 1985. The fire destroyed the control room and caused about US$ 3 million in damage. According to the Nederland Fire Chief, while the fire department was doing overhaul on the fire to make sure it was out, several Gold Record plaques awarded to Guercio's group Chicago that were hanging on the wall of the studio, were damaged by a chain saw. After the split-up with Chicago and the Caribou Ranch fire, Guercio became disenchanted with the recording industry and shifted gears, pursuing a successful career in large-scale cattle ranching, property development, and oil and gas exploration, drilling and production, particularly coalbed methane wells. Also, he donated the remaining equipment to the University of Colorado-Denver in 1986.

Photos by Rocky Mountain News
by Jackrabbit on 2:15 pm