Kay Petal's Interview: The Art In Her Hands 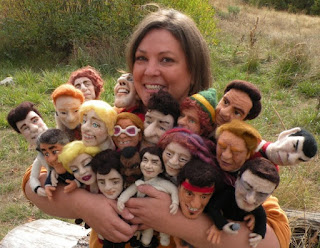 Absolutely impressed!!! First time Jack Rabbit saw a needle felted caricature doll by her, he was pleasently surprised! He discovered it by chance on the internet while searching for interesting things related to Elton. The creations are so real, they've got their own life. Well, after that, Old Rabbit determined not to throw away his old wool sweaters anymore: they could be so useful, specially if you had the ability. You don't, Rabbit, sorry. But she does. She's a genuine person, a really great person to chat with, an amazing eltonite, with a positive view of life, and she's so so talented. So, please, everybody get up, because the doors of AllSongsList are all wide open to receive, from Alaska, the fantastic and incredible: Kay Petal!!!!!

Thank you for the acceptation, Kay, it’s really an honour to have you here. Which are your most beautiful memories of your childhood? How it was growing up in Alaska?

Thank you Miquel – I’m honored you asked to interview me. Growing up in such a beautiful place as Alaska has left me with so many memories - My very first recollection of my childhood was the day my family moved to Alaska. I vividly recall the moment the small sea plane touched down on the water in Ketchikan harbor. My dad was an avid outdoorsman and our fishing trips first made me notice the splendor of nature and realize that I was very lucky to have such a place for a playground.

That sounds beatifully. “I was the crafty sister with stacks of craft magazines in my room at a young age”, you said. Was it that so?

That was me - I dreamed of someday being so clever as some of the craft designers in the magazines. My nickname was Holly Hobby. I dabbled in so many things my whole life and finally found “it” in the craft of needle felting 6 years ago. And that craft led me to discover my artistic abilities that I never knew I had.

So, when did you discover what to do with your old wool sweaters? And who was your biggest influence? 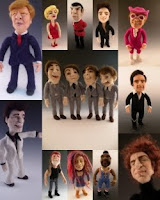 Living in a cold climate means lots of warm, wool sweaters. But many that had been accidentally thrown in the washing machine, never to be worn again because they had shrunk so much and the wool turned into thick felt. In looking for ways to turn some of my shrunken favorites into something crafty, I discovered handy little tools called barbed felting needles. I learned that I didn't even need sweaters to make cool stuff - I could start with fluffy, un-spun wool and make it look like real people using only these barbed needles.

My biggest influence has been a fiber artist from Denmark. Birgitte Krag Hansen pioneered the craft of sculptural needle felting in the 1980s and her work is magical. Just after purchasing one of her books, I learned she was traveling to Alaska to teach needle felting workshops. What I learned from Birgitte was more than techniques, it was as though a magician had revealed the secrets to me.

Marvellous! Have you ever give one of your needle felted character to his real replica and, in case, what it was his/her reaction? 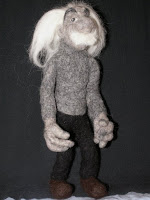 I have given several of my caricatures to their real counterparts - the most fun was the doll I made for John 'Rabbit' Brundrick, the keyboard player for The Who. His wife told me that Rab was like a little kid when his doll arrived early in the morning. I had dressed li'l Rab in a red & black western style shirt so Rab dug through his closet to find his matching shirt to pose for a photo with his doll. Each time I see the photo I smile because I can see the collar of his pajamas peeking out from the red shirt. As a special thank-you, Rab sent me some of his original songs and some video footage he filmed while performing during live Who concerts. As a long-time fan of The Who, this was pretty exciting.

And most recently, a funny video clip of my li'l Conan O'Brien doll appeared on the Conan O'Brien show. A rep from the show told me Conan LOVED it. The reactions are always fun!

So nice, Kay. You couldn’t forget Elton. How difficult it was to do his caricature art doll and how you get the inspiration to do it?

My Li'l Elton was one of my early caricatures. I grew up watching Elton on TV and his flamboyant costumes and funny glasses stand out in my head very much. Elton was a the top of my list the moment I realized I could make dolls that resembled real people. I enjoyed endless hours of Elton John music as Elton's colorful personality emerged from the wool. I think I captured the humorous Elton that doesn't take himself too seriously.

I remember distinctly becoming a fan in the early '70s. I was only 8 when I picked up an Elton John/Bernie Taupin songbook at a friend's house - the words and pictures fascinated me long before I ever heard any of the music. Besides what little I heard on the radio and occasionally on tv, it wasn't until my older sister brought home the Captain Fantastic LP did I finally get to really listen to the magic. And now, in this age of YouTube, I especially like watching his earliest performances. The 'purchase on itunes' option on the videos is a handy way to collect his music.

What was it like seeing Elton for the first time and how many concerts have you been? And also, could you tell us if you ever have been in touch with him, get a signed autograph or even, speak with him or with other member of his band?

Sadly, I have never even seen Elton in concert or had any opportunity to have any sort of contact with Elton or his band members. Elton traveled to Alaska several years ago for concerts but the tickets sold out in minutes. I don't know who was more disappointed me or my Li'l Elton - he wanted to go hear Big Elton so badly!

Hahaha. And which is your Elton´s item that you really appreciate, for being hard to get or for the happiness you´ve got to have it?

It would have to be my li'l Elton Doll - many people have contacted me to purchase it and the answer is always “sorry, no, he’s not for sale” there is no way to put a price on his head. I believe the only one that could ever get it is Elton himself - and for him there would be no price!

Understandable. Felt alive. I really like the name, and I truly recommend your website, of course, with beatiful pictures of your creations. What more we could find there? And what we have to do if we wanted to buy some needle felted dolls?

Thank you, Miquel. I have fun with my dolls and I think my website shows that I don't take myself too seriously when it comes to my art. The videos of my dolls in action demonstrate how hilarious and lifelike they are. And I do take custom orders for dolls on occasion. I can be contacted through my website - www.feltalive.com

You know, I’ve never counted them - perhaps 25 or so. My list is long of people to bring to life in wool. Musicians are especially fun as I immerse myself in their music while I'm working. Creating Li’l Elton was most enjoyable! Some of my plans include The Rolling Stones, Lady Gaga, and my nephew keeps requesting Biggie and Tupac; but really, the list goes on and on.

Once you said: “My sense of humor drives my creativity”. How important is not to loose humour in life?

For me it would mean to lose my ability to cope with the stress of life. Humor is a driving force behind my work - my dolls are silly and unusual and they make me laugh. The reward is even greater when they make other people laugh.

Sure. Kay, what are your other interests? What do you like to do with your off time?

We are currently traveling/living full-time in an rv and are having fun exploring strange, new places outside of Alaska.

Hahahaha, thank you. Would you want to add some observation or suggestion, or something you want to say to eltonites?

First of all – Thanks Miquel for all you do keeping us informed about our favorite living legend! And to the Eltonites - Thanks for your interest in my needle felting and my Li’l Elton caricature doll. My hope was to capture Elton John’s endearing, playful side and I hope the li’l guy makes you smile.

For sure, Kay. Well, Eltonites, that's another part of Jack Rabbit's tour around the world. I would like to express my gratitude to Kay Petal for her kindness and for sharin' her time with us. Kay, it was really an honour to have you here. I am sure Eltonites appreciate your interest and the love you put in your creations. For me, that was one of the best experiences of my eltonites live. Keep on with your beautiful artwork, and a big hug for you. Thank you very much for everything.

Pictures courtesy of Kay Petal
by Jackrabbit on 2:04 pm

Etiquetes: Eltonin' Around The World, Eltonites' Have Talent, The Weekend Of...