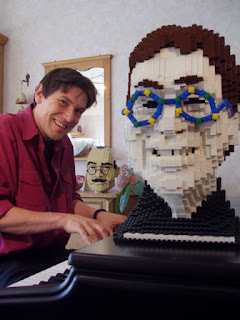 Absolutely impressed!!! When I was younger, so much younger than today, I used to play with my Lego brick pieces. A house, a car, a robot. I never could imagine that, with those pieces, somebody could build Elton (not me, obviously). An Elton's portrait, that's amazing! When I knew about his work, I sent Jack Rabbit to Belgium to interview him. And we found more than a Lego master: an absolute talent, well known for Belgian audiences of course, and for other parts of Europe as well. I was fascinated about what this man could do, so I invite he. Please, ladies and gentlemen, everybody on his feet to receive the one and only, the fantastic... Dirk Denoyelle!!!!

Thanks so much for the acceptation, it's an honour to have you here, Dirk. Could you tell us a little bit about how one becomes a Lego Builder?

Becoming a LEGO builder is quite easy. You just buy LEGO, and start building. Becoming professional is the same, but then you have to manage to sell what you have built. If you want to become a LEGO Certified Professional, you have to match a set of criteria, like having an established business (not just a hobby), be willing to comply to LEGO rules (we are not allowed to build for alcoholic beverages companies, religion, pharmacy, etc..., we pay a fee, we have meetings...) and have a proven track record of quality. There is a sort of jury, and so on...

Right. What are some of the things that help you be a Lego Builder? Patiente could it be one of those.

If you want to be a good LEGO builder, you need good 3D insight, eye for detail and quite a dose of creativity. Because in the real world, edges are smooth. In the LEGO world, you kind of digitalize to the level of a LEGO element. You also sort of need to have the complete catalog of LEGO elements in your head, and then use those in order to get as close to the real thing as you can. But you can even go further: there is no need to try and copy reality. You should allow yourself to think beyond reality, and compose your own thoughts, materialize your ideas into LEGO. That's probably where art starts :-)

Because in my first life, I am/was a voice imitator. My theatre shows were - and for some part still are - based on my ability to imitate voices. If I use other people to ventilate my thoughts on stage, it's a next step to also build these other people in LEGO. That was the start. Today my focus on portraits is probably also business driven. I'm one of the very, very few to do this; and that means I have a huge market :-)

That’s perfect! But which is your way to proceed to do those artworks? I mean, you made sketches first, take pictures?

I always start with pictures. In 2D, for the mosaics, the picture I receive from the client is the basis for the mosaic. I may add a fish if the guy likes fishing, or a pair of shoes if the girl loves shoes, but that's about it. With 3D heads, I need a good frontal view and a good side view. Preferably from all sides, as nobody's symmetric. And then it's kind of just building. From the bottom to the top. There's a video on http://www.amazings.eu explaining the process.

Absolutely brilliant!! Could we define you as an Eltonite, Dirk? In case, what fascinates you most about Elton John?

I had never heard the word "Eltonite" before, but I guess I AM a huge fan. Many times I've wondered if I would use my status as a Belgian Celebrity (well, I'm not verrry famous, but famous enough) to get myself a backstage pass for his shows when he's in the country. I'm just too afraid that talking to Elton in person would not meet the high expectations I have. I mean: to me he is the best combination of songs, pianoplaying and singing I know. With Simon and Garfunkel as a close second and Billy Joel being a nice third. I've always wanted to do an Elton John parody in my shows. But I'm not even nearly good enough. I took piano lessons for 2 years, and then managed to play "Your song" reasonably well. To then realize that I can't reach his voice. So yes, I am an eltonite !

Hahahaha First time I heard this word was from Jack Rabbit’s mouth almost 20 years ago. Well, how difficult it was to portrait Elton? And how many lego portraits of him you have made? 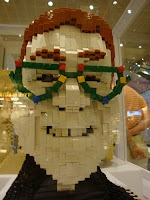 He was quite easy, as it happens. The only difficult bit was the little gap between his teeth. That's a distance of half a brick exactly in the middle of his face. That is pretty much NOT LEGO. But with some very complicated building inside, I managed to get it done without "cheating". I mean, I could have just glued the bricks in place. But I didn't.

Well, that depends on how you define a project. Back in 2000 I built 25 LEGO heads for an exhibit to celebrate my 10th anniversary on stage. That took me 9 months or so. I'm now building a series of 40 heads for a client (Kloen vzw, a hospital clown charity). I have about 4 years to do that. But otherstuff is done in the meantime. I think the project I'm completing this week is the largest so far. Took about 9 months as well, involves about 500.000 bricks - I think - and 550 hours. It's a replica of an event/living complex in Ghent, called "Zebrastraat" (they have a website as well).

One of the flemish best-known comedians. Also an imitator, singer, speaker. First it comes to my hear is where you find the time to do everything. Then, how amazing is to see how an event, conference or congress could turn with your touch. To this hard days we're living, humour could be the best way to communicate?

Well, there's a few answers to this. First: finding time is indeed the tough part. I think I run two full time jobs these days. On the other hand, I have 3 assistants for the LEGO, working on self employed basis whenever things get too busy. And for the comedy I have a very good team of technicians, management and keyboardplayer.

Humour is always a good way to communicate. In fact, a lot of times I'm hired by multinational companies because they want to deliver messages. And they know that hiring a comedian, one that can put a new perspective to their content, will facilitate that process.

About the hard times: I was born in 1964. By the time I got conscient about the ‘outside world’, we were in the seventies. Oil crisis. When I graduated (as an engineer), it was hard to find a job, even for engineers. I have not known any period in my life when people said "today there is no crisis". Of course we are in hard times today. But what I mean is: we are ALWAYS in hard times. The only way out, is to take matters in your own hands, and find your own way out of the hard times. I found a line of work in which there is hardly any competition. And very much fun to do as well. I know I am very lucky :-)

Yes, you are, and you have reason in what you’re saying, Dirk. I am wondering about how many people are on your list of imitations? 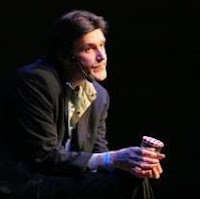 Wow, that's a tough one. A few years back, I counted them and got to about 200. But as I perform more and more internationally, the importance of voice imitation in my shows is getting less. There just are not very many people that EVERYBODY all over the world really knows. Or knows what they sound like. Some singers, maybe. But I watch other TV series then you do. Listen to other music (except for Elton !), watch other movies, sports people don't talk lot... So I imitate accents more than people, when performing internationally.

My God, that’s awesome! Well, Eltonites, are you looking for a special present for your partner ? A special company logo? You could order on his blogsite. I really love your website, Dirk, specially the Exhibition part. That's on www.amazings.eu . What else we could find there?

It's a catalog of every line of LEGO art I make: 3D heads, mosaics, replicas of buildings. There are some movies, I explain the LEGO team building concept. And there are some special things I made "on the side".

Well, if I ever do meet Elton: what are the questions I should ask him, and which should I not. Just not to make a fool out of myself ... And people who want to know more about my performing: http://www.dirkdenoyelle.com and (archive) www.dirkdenoyellefansite.be

Well, that's the big question every Eltonite is asking himself, Dirk ;-) Eltonites, I do recommend those websites, of course. Well, Dirk, I have no words enough to thank you for being my guest. It was such a priviledge to have you here.
by Jackrabbit on 12:50 pm

Etiquetes: Eltonin' Around The World, Eltonites' Have Talent, The Weekend Of...