We could find Dwight’s surfaces in Buckinghamshore. The Dwight family was comprised mainly of artisans and labourers. William Dwight, Elton’s great-grandfather was a shoe maker, of Waterside, Chesham. He married Janet Palmer and had one child: Edwin. The surname Dwight is a derivation of DeWitt, which originally comes from the Flemish for white or blond. Therefore, it is likely that some of Elton's earliest ancestors came from the Low Countries, and had blond or fair hair. Previously, this lineage was rooted in the land: William's father James was an agricultural labourer, living and working in Ashley Green, a hamlet in Chesham, throughout the mid-19th century.

Edwin, Elton’s grandfather, was a cable factory worker, who moved to join the cable firm of Callander in Belvedere, Kent. The firm had a name for music boasting a brass band that won many a silver cup and rosette in interfactory competitions. Edwin played soprano cornet in the company’s band. The company also offered good facilities for sport, specially football. Edwin married Ellen Shirley. The Shirley family were also agricultural labourers in the same area, although Ellen's father, George, spent some time making chairs in the 1870s and 1880s before returning to the land by 1891. Edwin and Ellen Dwight had six children: five sons and a daughter. The youngest son, born in 1925, was Elton’s father Stanley. One son, Tod, fell mortally ill with tuberculosis at the age of thirty-four. Two of his sons, Roy and Dave, increased Dwight’s family and regarded Stanley as an elder brother. Stanley, as the rest of the family, was keen at football, and realized that young Roy seemed a better than ordinary player; he’d finally played in the First Division with The Nottingham Forest. Edwin taught his son Stanley to play trumpet. Stanley performed with several local amateur swing bands and grew proficient enough to be asked to sit with classy professional outfits like the Lou Praeger Orchestra.

After leaving grammar school, Stanley had gone to work for a boatbuilding firm named Walkers, in Rickmansworth, Hertfordshire and became personal assistant of the owner. The Second World War saw Stanley, at only 17, joinin’ up for the Royal Air Force Naval Reserve. Within only months he was selected for officier-training to fly on bombing missions. He also formed his own band in the service under the name of “Star Wight”. One night in 1942, he met Sheila Harris, she was delivering milk for the United Dairires company, as a wartime job.

Despite Stanley's chosen career, it was Sheila's side of the family that had earlier military connections. Her father, Frederick George Harris, served as a soldier and was still enlisted at the time of his marriage to Ivy White in 1921. Aged 22, he had escaped the worst ravages of the First World War and by the time his daughter was born, four years later, he had taken up the somewhat less stressful job of tennis groundsman at a club near the family home in Meeting House Lane, Peckham. Ivy's background, in contrast, is shrouded in mystery. She was born in the workhouse on New Year's Eve, 1899, and had two birth certificates dated 12 days apart. It appears that her father, a merchant seaman, abandoned her and her mother at the dawn of a new century, and this was something Ivy never forgot or forgave. On her marriage certificate, she renounced her real father and put down the name of her step-father, Robert Whatling, instead.

The Harris family home was 55 Pinner Hill Road, a semidetached council house in the row just south of the Victorian clock tower which looks over Metroland. Sheila Harris, Elton’s mum, joined the ATS, working as a clerk at Coastal Command’s complex at Northwood in Middlesex. She married Stanley at Pinner Parish Church in January 1945, when she was only 19, and Stanley, 20. They moved with Sheila’s parents at 55 Pinner Hill Road, because finding an own place in those postwar years was really a problem and, also, Stanley’s service duties frequently took him away from home, leaving Sheila with her parents, a younger sister, Win, and her brother, Reg.

Sheila, now pregnant, didn’t like Stanley’s frequent abscences and they thought seriously of leaving RAF and returning to his former job at Walkers, but discarted for the lower paid. By 1947, when the son was born, he had become a flight Lieutenant. It was well-known in the family that Sheila had really hoping for a girl but baby Reg nearly granted her wish. The baby possessed innmunerable changes of outfit and a Shirley Temple massed golden curls. In 1949 Stanley received a two-year posting to Basra, Iraq, and Sheila elected to remain in England. For their first Christmas apart, Stanley arranged a deliver of an expensive pedal car to Reg. With his father away, Reg lived in an almost wholly femenine atmosphere until he was four.

In 1953, Stanley was promoted to Squadron-leader and posted as service suply office to Lyman, Wiltshire. They moved to a four-bedroom house provided by RAF but that didn’t suit Sheila, and within a shorter time, returned back to Pinner. Stanley was a strict, old-fashioned parent, requiring the same order and discipline in his home as he did as a senior supply officer. Sheila, overprotected him, not allowed to run riot with other children, playing in the garden by himself. Reg loving family circle comprises his nan Ivy, his uncle Reg and two cousins, Joan and Cath, and auntie Win with her child Paul. For the Dwights, his grandparents, still living in Beldevere, Kent, delightin’ them by his skills on the piano. 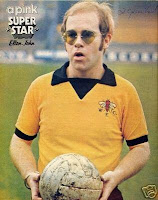 Like his father, Reg became a passionate supporter of Pinners’ local team, Watford FC. He was educated at Pinner Wood Junior School, Reddiford School and Pinner County Grammar School and then left for GCE A Level examinations for the career in music industry. The first thing Helen Piena, piano’s sub-professor, noticed was his astounding natural ear: “I remember once playing him a prelude by Handel four pages long, as soon as I’d finished, he played it straight back to me just like a gramphone”. She remembers him as a model pupil, hard-working, punctilious and polite: “he’d send me letters with kisses at the bottom” she said. But one Saturday, Reg told her that he might have to give up his scholarship at the Royal Academy for the divorce of his parents.

Sheila had met a local builder and decorator named Fred Farebrother during the war. Stanley quickly married his new love, Edna, and had four sons with her in rapid succession. He was quick to reassure Reg that there was no question of his leaving the Royal Academy and that he could still have his piano. Reg chose to live with his mum, he was only 15: “My father never came to hear me play. Not ever,” said Elton. “He was a tough and unemotional man. Hard. In the RAF. He was dismissive, disappointed and finally absent. I just wanted him to acknowledge what I’d done. But he never did,” he added. Stanley had wanted his son to have a more conventional career and steered him towards banking. Elton said it was their shared love of football that enabled them to "make peace" at last, before Stanley's death in 1992: "I made my peace with my father in the end. We were still awkward with each other. That awkwardness never goes. But he was very proud of me in the end and I was the chairman of Watford, so when I went up to Liverpool and watched Liverpool and Watford, or Everton and Watford, he used to come. (...) I didn't hate my father. I was afraid of him because he was a very strict disciplinarian and he didn't approve of me doing what I did at all." 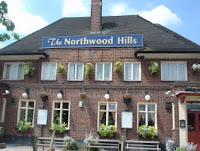 Reg’s stepfather Fred was more like and elder brother, enthusiastic about pop music and unfailingly amused when Reg addressed him as his name spelt backwards “Derf”. They moved to Frome Court, one of the colonies of maisonettes on the long road between Pinner and Northwood Hills. With the help of Sheila and "Derf", Reg became a weekend pianist at the nearby Northwood Hills pub, playing on Friday, Saturday and Sunday nights. He played everything from Jim Reeves country songs "He'll Have to Go" to Irish tribute numbers "When Irish Eyes Are Smiling", old pub favourites such as, "Roll Out The Barrel", hits of the day, "King of the Road", and songs he had written himself. He received a modest, steady income and substantial tips. "During that whole period, I don't think I ever missed a gig", he said later. A stint with a short-lived group called the Corvettes rounded out his time. The Corvettes, name inspired by the Chevy Sport car driven by two American TV heroes on the Route 66 serie, played a mixture of blues and rock’n’roll. Founders were Stuart Brown and Geoff Dyson, but they disbanded after a few unspectacular months.

Reg efforts at the Royal Academy, his classical trainer, his love to rock’n’roll and pop music, his involvement at a more succesful group, Bluesology, and finally, the New Musical Express advertisement, let Reg to fulfill his dreams, with a Lincolnshire local poet called Bernard Taupin. Changin’ his name for Elton and John, “Reggie Jackson” could sounded different he said, he started to go straight at his yellow brick road of success. The roots, for sure, influences our personality. After all, no one could discuss Elton’s love for music could come for a long time ago family member who played the trumpet. And without Elton’s mother love for rock’n’roll music, this legend never could have been the same. It’s funny enough to see how Elton’s passionate of shoes could start with an old family branch of shoe makers, the unforgettable glasses coming from a “desmesurado” love for a Buddy Holly’s look alike, and, maybe, only maybe, his outrageous costumes for his various change of outfits in his childhood. Genuine Elton. Happy Birthday, Sir Elton.