The Story Behind "Smiling Face"

Elton, Davey Johnstone, John Reid and Steve Brown were at Chateau d'Hierouville late one night, back in 1972, drinking the Chateau's self-produced wine and debating about Davey been unable to find a company in London to produce his wanted-to-be first solo album, when suddenly Elton said: "we would start our own label and bring Davey's album out in that". As Davey remembers, "we all said yeah! and went to bed. Next morning we all got up and said: was everybody serious?". And they were. Rocket Records Company was founded in 1973, a record label distributed by MCA, allowing Elton's band members to pursue a solo career. Also is known that Davey, Nigel Olsson and Dee Murray recorded a single as a trio for Rocket, although it was never released. 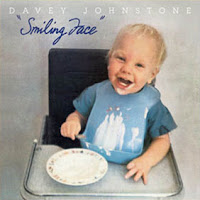 And Davey Johnstone has issued a lone solo album during his career, the obscure 1973 release "Smiling Face". It's actually an excellent folk rock album. Produced by Gus Dudgeon, Davey counted with Ray Cooper on percussion, Dee Murray on bass, Nigel Olsson on drums, David Hentschel on synthesizer, Del Newman on saxophone and his then wife Diana Johnstone on vocals, among others. Davey wrote the lyrics on many of the album's songs, some of them collaborating with Diana. She also sings lead vocals on the track "A Lovely Day".

Elton John had this to say about Smiling Face "This album is like finding a box of buried treasure." And the Canadian singer songwriter Ron Sexsmith said this album would be his sunday morning favourite record.
by Jackrabbit on 1:35 pm