The Eltonite's Day with... Linda A. Stienstra!!!

Hello Eltonites. We have here one of the greatest eltonites I've found out there. I met her in Munich, in an hercules fan convention,and I was surprised how many concert she had seen. She has been almost everywhere. And she's a dearest person. Please a big welcome for the one and only: Linda!!!!!!!

Could you tell us more, please, who are you and where are you from?

I'm Linda A. Stienstra and live in Groningen, the Netherlands. 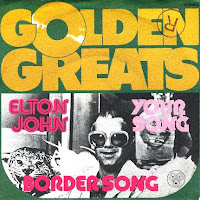 I've been an Elton fan as long as I can remember; I think ever since I heard Your song. Elton has everything I like in music: great voice, fantastic piano player, beatiful slow songs and great rock songs and of course he's a fantastic showman.

Great!!! What was it like seeing Elton for the first time and how many concerts have you been? And also, could you tell us if you ever have been in touch with him, get a signed autograph or even, speak with him or with other member of his band?

The first time I ever saw Elton live was in Rotterdam, the Netherlands. I had a seat way up in the ring, so I didn't get anywhere near him. But I remember that I was very excited anyway, to finally for the first time see him live. Ever since I've seen him about 45 times so far. I have many autographs from him and at quite a few of the Red piano shows I managed to get on stage. He does recognize me, for I'm always wearing my orange (national color of the Netherlands) feather boa. I got a handshake at some occasions, which was of course super. A couple of years ago Elton's band and I traveled in the same aeroplane from Dublin to Manchester and I spoke to all bandmembers, who were really very kind.

Wow!!! And how should be your dreamed concert? And which one of Elton's live shows you thought you should be there, if you could, even back in time? 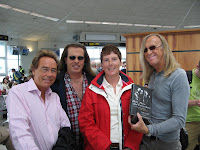 How it was, and still is, the success of Elton in your country? Which have been his hits in sales terms? And which are dutch’s favorite Elton's albums or songs? And could you still hear Elton's music in the radio, nowadays?

There are of course still loads of fans in the Netherlands; his recent concert in Rotterdam was sold out. And that he is still popular in my country is obvious, for varios radio stations broadcast his concert live. His most popular songs are Your song, I'm still standing, Sorry seems to be the hardest word and Don't go breaking my heart. At least those are the songs that are played on the radio.

The first ever autograph I got from Elton is my favourite Elton item.

What do you think about news of Elton going to studio again for a 2009 album? What type of album would you expect? And the record's company release of more DeLuxe editions, without forgetting an special box of Elton's duets and rock numbers, and so on? 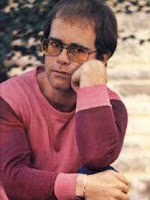 It would be wonderful if Elton would release an album with new songs, but since he has such a big back catalogue I'm already happy with what there is now. I would prefer an album with nicely orchestrated songs, both slow and fast. For me the music is the most important, so I do not really care too much about special editions and stuff like that. An album with duets though would be super.

Quite difficult to just pick 5 songs, for there are so many I love, but here we go:

more or less in random order..... and the list is much too short!!

Would you want to add some observation or suggestion, or something you want to say to other eltonites?

It always strikes me at concerts how great it is to meet other people who are just as big a fan as I am. It's great to share a passion!

Ok, thank you very much for sharing your time with us, Linda. Really a pleasure to chat with you, an enjoyable experience. Take care my friend.
by Jackrabbit on 3:59 pm