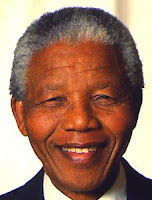 Nelson Rolihlahla Mandela, was the first democratically elected President of South Africa, having previously been a prominent anti-apartheid activist. Mandela was born in Transkei, South Africa on July 18, 1918. His father was Chief Henry Mandela of the Tembu Tribe. Mandela himself was educated at University College of Fort Hare and the University of Witwatersrand and qualified in law in 1942. He joined the African National Congress in 1944 and was engaged in resistance against the ruling National Party's apartheid policies after 1948. He went on trial for treason in 1956-1961 and was acquitted in 1961. Upon his release in 1990, the policy of reconciliation he pursued enabled a peaceful transition to a new, democratic South Africa. He had received the Nobel Peace Prize 1993. In his 90th birthday, Elton John performed "Happy Birthday" in his honour. 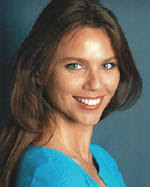 Lara Logan was born on March 29, 1971 in Durban, South Africa. She attended Durban Girls’ College (high school) and went on to the University of Natal in Durban and graduated in 1992 with a degree in Commerce. Her journalism career began as a general news reporter for the Daily News (1990-92) and the Sunday Tribune (1988-89), both located in Durban, South Africa. Lara Logan was named a CBS News correspondent in May 2002 and has also contributes to 60 Minutes. She provided daily reports on the war in Iraq and was the only journalist from an American network in Baghdad when American troops invaded the city, reporting live from Firdos Square as the statue of Saddam fell. She hosted the half-hour series featuring past VH1 "CLASSIC 60 MINUTES" interviews expanded with never-before-seen footage and conversations with some of the biggest names in pop and rock music, including Billy Joel, Bruce Springsteen, Tina Turner, Ray Charles, Elton John, Sting and The Eagles.

Tammin Sursok was born on August 19th, 1983 in Johannesburg, South Africa, and at the age of 4, she emigrated to Australia. Her mother, Julie is a classically trained pianist and guitarist and as a result, Sursok was brought up surrounded by music. As a youngster, Tammin was involved with the Sydney Youth Musical Theatre where she pursued her interests in acting, music and dance. In the year 2000, Sursok began her role as Dani Sutherland on the popular Australian series "Home and Away". In 2001, she won the Logie Award for Best New Female Talent category. During 2002, Tammin had the honour of being selected as Junior Youth Ambassador for NSW and in 2003 she received the Australian Centenary Medal for her 'Service to Australian Society and Acting'. She also begun taking steps towards starting a music career by writing her own songs. Sursok's second single "Whatever Will Be" was the #1 most added track to Australian Radio in early March and debuted and reached of #13 on the ARIA singles chart, the single became a moderate success. Soon afterm, Sursok's debut album, "Whatever Will Be" was released and reached a high point of #13 on the ARIA album chart. The third single from the album "It's a Beautiful Thing" debuted at #30 in the ARIA singles chart.
by Jackrabbit on 8:38 am