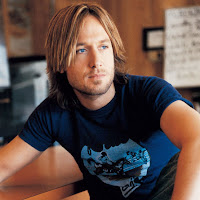 Keith Lionel Urban was born 26 October 1967 in Whangarei, New Zealand. Urban's music interest came early with success in local singing contests and forming a band in his early teens. Growing up then in Australia around Brisbane, Urban first picked up a musical instrument, a ukulele, when he was only four years old. Urban began his career in Tamworth, Australia participating in Tamworth Country Music Festival, having moved there at an early age. In 1991, he released a self-titled debut album, and charted four singles in Australia before moving to the United States in 1992. His breakthrough hit was the Number One "Somebody Like You", from his second Capitol album Golden Road (2002). This album also earned Urban his first Grammy Award win for "You'll Think of Me". His influences take in singer songwriters Elton John and Jackson Browne, the celebrated writing and guitar playing of Elvis Costello as well as musicians such as Mark Knopfler from Dire Straits and Fleetwood Macs Lindsay Buckingham. On "Interview Magazine", October 2006, featured Keith Urban sharing his thoughts with Elton John and explaining: "One of my writers, Monty Powell, and I were talking about records, like your album Tumbleweed Connection [1971], which if they were released today, would probably be released as country. There were a lot of those tunes that I grew up with that weren’t country, but it was inherent in what I was listening to".

Lucy Lawless, born Lucille Frances Ryan, on 29 March 1968 in Mount Albert, Auckland, New Zealand, is an actress and singer best known for playing the title character of the television series Xena: Warrior Princess and for her role as Number Three on the series Battlestar Galactica. Lawless first appeared on Broadway in September 1997 in the Grease play remake, as the "bad girl" Rizzo character. Lucy attended the Elton John and Tim Rice’s AIDA Los Angeles Premiere - 7 November 2001. In her own country, she is a trustee for the National Children’s Starship Hospital and received an Order of Merit of New Zealand from the Queen for services to the community.
by Jackrabbit on 11:15 am