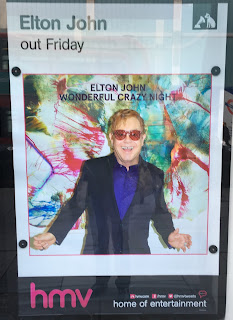 Hi Eltonites!!! Due to the release of the well expected new Elton John album, finding him promoting with high energy. Here, in AllSongsList, we want to continue what we did in 2010, for "The Union" and in 2013 for "The Diving Board" albums, asking fifth of a kind people to review the album. Sure there are a lot of reviews out there, but no ones like this master class series, particularly for being from an eltonite prisma.I think I told you several times how I missed the days that Hercules or East End Lights fanzines arrived home. The place where I live, in Spain, it wasn't so much info about Elton John at that time, the only info we've got was for his tantrums, his eccentricities, his clothes, ... but poor things about his music, the most rellevant thing.

Those fanzines, made by the effort and the excitement of eltonites like me made such a worthy job promoting Elton and talking about the things we fans really interested. I remember how much I enjoyed reading Jim Turano's articles and reviews, that man is a magician; enjoying so much the irony of Claude Bernardin and his passion for Elton's catalogue, this man is such so great; enjoying reading the articles of Liz Rosenthal about Elton with her sensibility and knowledge about Elton, this lady is such a genious; enjoying George Matlock commentaries about Elton and how he was (then and now) expert in Elton's area of influence, this man is such so incredible; and enjoying David Sigler passion and effort doing an exclusive Elton John and Bernie Taupin radio show every week, this man is such so talented. Could not forget the book that every eltonite must have in their library: "His Song: the musical journey of Elton John", by Liz Rosenthal; "Rocket Man: from A-Z" by Claude Bernardin along witn Tom Stanton; "The Elton John Scrapbook" by Mary Anne Cassata and Jim Turano. And how rellevant radio shows are the ones on Radio ORLA (now a podcaster in demand) co-founded and directed by George Matlock; or the celebrated every week festival of standards and obscure tracks on air on WOMR 92.1 fm (Provincetown), 91.3 (fm Orleans).

So, I would like to thank publicly to Claude Bernardin, to George Matlock, to Jim Turano, to David Sigler and to Liz Rosenthal for this great job, for their collaboration with AllSongsList again this time and for doing such wonderful and amazing articles. You are the best, a five of a kind!


So, Eltonites, this is just the beginning. Hope you enjoy as much as I am doing. The "Wonderful Crazy Week" continues. Thanks always for being there!!!
by Jackrabbit on 4:21 am