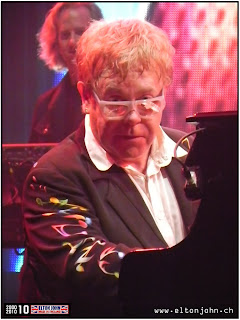 Hi there! We have Stephan on the kitchen, Patrick and Anna on the dressing room, Marie Hart and her sacrified friend, Lynn waiting for Elton if he came or not, Jamesm on football and, finally, Sophiah with her hilarious and funny story about meeting Elton, just wait and see. How's Elton? Which words they exchanged? Their advices in order to meet Elton or not. Everything on the second part of the stories. Just take your sit and continue the reading! Jack Rabbit, this is your turn:

Stephan start please: "He (Elton) was dressed in one of his black overalls, which he had usually put on for the encore songs at concerts during his last (then) tours. He made a pretty relaxed impression on me and seemed to be very curious about the things to come". Awesome! "Next", continues Stephan, "I presented our 150 pages "Birthday Book" to Elton. I turned over a few pages, just to give him a glimpse of the work, but Elton virtually pulled the book out of my hands and started to flick through its pages enthusiastically himself". "He was very friendly, very easy to deal with" starts Patrick Andrey, "We were introduced by our first names and he said: "it's great to meet you". We then chatted a little and made a picture together. He even asked the photographer to make another shoot for safety. Then I offered him a little statue I comissionned, a mini-Elton which seemed to please him. He asked if he had to take it everywhere with him and I said: "Yes, of course"".

"Hi, I met Elton, many many times" debuts Sophiah Koikas, from US: "The first time I was at Universal Studio where he was performing. I saw a restaurant they were fixing up for a party after the show. I thought to myself to get a wine glass and keep it with me that later on I can walk through the door saying I stepped out for some air. I don't know what made me think of it but it worked! I met this guy who followed me after the show to the restaurant. I was behind Valerie Bertanelli, an actress who is a fan of his too. They stop me at the door and I say, I was very hot and came out for air, here's my glass and he let me in and they stopped the guy I met and he says, I'm with her and they let him in. He goes for the food table and was noticed and they finally made him leave. I saw Elton". Jamesm explains his story: "He was always very much at ease happy to talk about the game and sign any autographs. He once signed a card for my Pen Friends Mother from Lady Choc Ice. One time he had a platinum disc or "Too Low For Zero" I asked if I could hold it to which, he replied sure by for f**k sake don't drop it!". "He replied to all my cards them days" says Marie Hart with satisfaction: "After the concert at Preston Julie kept saying hurry up we have to go to catch the bus, but obviously I wasn't going to go as I'd been promosed to go backstage to see Elton. So after we had seen him we missed the last bus to home. Julie was crying, didn't know how we were going to get home, but I didn't care I'd met Elton. I ended up going to the police station they said you will have to get a taxi home! We had no money so we had to ask Julie's dad to pay it, this was after midnight, he was absolutely mad, lol".

Lynn, we are very curious, what finally happened? "Finally, the doors opens, and there is ELTON......" wow!!, what else, please? "He came in and was so gracious. He answered questions and then made his way around the room, speaking with people and posing for a quick photo. When he got around me, my heart was beating like crazy. He took my hand and I said hello to him, he asked my name, I told him, he called me by name and said it was nice to meet me, and he gave me a hug. I told him I had loved him since I was 11 years old and I couldn't remember my life without his music. He said thank you and asked how old I was. I told him, he laughed and replied: oh, you're still just a youngster! I told him I had the pleasure of speaking with Bernie Taupin several years earlier on a show called Rockline. I said to him I was so blessed at the opportunity to meet him and he said thank you for coming". Wonderful, Lynn!!! "I remember of a guy that was sitting at my table gave him a hat from the town in Alabama where he is from called Sylacauga. Elton was looking at it trying to pronounce the name. We were telling that was where Jim Nabors (the actor/singer who played Gomer Pyle on the Andy Griffith show) was from. He thought that was pretty neat". "When we thanked him for his hospitaly as we were leaving to attend the concert" reminds Patrick "he told us to make a lot of noise, I replied: yes we will. It was a moment of pure happiness". "Another time" continues jamesm, "Another time he appeared at a local book store to help celebrate the Centenary of the club, my friend asked  him about upcoming dates to which he replied: buy Evening Standard dear! Sure enough, that Friday advertised were the two dates he did with Eric Clapton at Wembley in the summer of 92". Wow!

Stephan go concluding your experience: "The meeting culmination was surely the presentation of a star certificate: we had named a star in the cosmos "The Elton John and Bernie Taupin". So wonderful!!! "He was shyer than I had imagined he would be but confident" remembers Lynn. "Not at all cocky, he was humble, he was taller than me, when he was speaking to me, he made me feel like it was just him and me and not surrounded by other people, he did not rush at me, he looked me straight in the eyes when we met, he smiled and laughed a lot, he was warm and seemed so genuine. When he hugged me, it was a good hug not a wimpy half hug. he held onto my waist and I his during our conversation, he would lean in to me and I spoke in his ear. He just seemed like a regular person when talking with me". Patrick? "Actually, I'm happy to tell you I was not surprised. He was exactly as I imagined. He was friendly, generous, funny, warm". Sophiah follows: "I went up to Elton and I say, may I ask you a question? He say , what, take a picture with me? And I was very new meeting famous people and I was surprised he knew. So I say, how did you know? So he posed with me and then he kissed me on the mouth! I was tickled at how nice he was... that was my first time I met him". Wow, Sophiah!!! Lynn, you finish: "So the meeting to me was a once in a lifetime kind of a thing, something you hope you would get to do, but never think it will happen". "The only thing I can tell you is: believe!" thinks Patrick. Myself, I dreamed of this meeting during 25 years and I never thought it will happens one day". Ok! "If ever anyone has the chance to meet him" says Lynn, "I would say first, BE CALM. Be respectful of his space, and he would be the kindest person in the world to you. Later that year, my cousin and I got up on the front at a show in Montgomery, Alabama, and I got to watch him sign my "Goodbye Yellow Brick Road" album, that was so special too, but nothing could top meeting him".

Thanks so much, Eltonites. I loved hearing you with your experiences. I envy that, I am honest. Hope that day it arrives to me. Thanks everyone again for sharin' this with us and for your kindness. Oh, Marie Hart, what happened with Julie? "I don't hear from Julie, we lost touch, but she wasn't an elton fan, lol" :-O

pictures courtesy of Patrick Andrey
by Jackrabbit on 2:59 pm