Dolls and Recreations: Pieces Of Art

In Europe and America there's a real boom for collecting dolls. We could find: unique dolls, an expensive and single copy; also what's called the classical china copies, limited editions where after making the specified number of figures form for casting solemnly broken in front of witnesses; and the textile dolls. Precisely, in recent years become popular doll replicates. They are pieces of art. Fortunetly, Elton doesn't escape this trend. A variety of artists, amateurs or professionals, have developed their own creations. Jack Rabbit has made a journey around the world looking for those most remarkable recreations. Here are some examples. 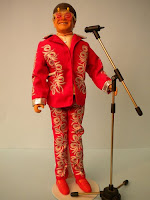 Yaboom was a toy company that produced only celebrity musical toys. The Elton John limited edition celebrity was manufactured by Yaboom Toys in 1999. The plastic incarnation of Elton stands at 11" tall and sings "Crocodile Rock" version. Cartridge refills were made available and included Rocket Man and Daniel. A button on the doll’s stomach is pushed for it to sing. Yaboom made 5 different models of this talking doll: Elton in a red suit; Elton in an off white suite with red roses; Elton all in black with a sparkle jacket; Elton with a yellow jacket with black pants and Elton in black and white suit. Proceeds from the sales of the doll went to his aids foundation. 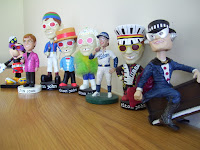 Elton started his BobbleHead industry in 2003, a collection made by Bobble Dobble. The multi-color Elton John bobble-head stands approx 7-8 inches tall and most of these were sold exclusively at the Elton John Store, at Caesars Palace in Las Vegas during Elton's "Red Piano" appearances. We had the following figures: the Pinball Wizard with the iconic pair of boots and the unforgettable moment in the rock opera, "Tommy"; The Captain Fantastic, flying away on his magical piano, like the original 1975 album cover; Elton on his green boa; Elton with his flamboyant piano hat costume he wore on September 13, 1980 in New York City; Elton with the straw skimmer hat he wore in the 1983-84 period; and, finally the pink jacket he wore on his 50th show in his favourite place, MSG New York. One bobble head doll preceed the ones listed above. The 5 1/2" tall doll found Elton in his Dodger baseball outfit from the huge Dodger Stadium concert in 1975, the place where Elton played two sold-out concerts. 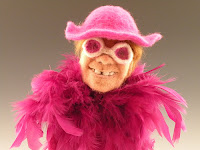 "I just can't get enough of bringing a real person to life in wool" explains Kay Petal, about their wide collection of li'l' dolls. Her specialty is in caricature art dolls, needle felted wool dolls. An average 12" Felt Alive Doll usually weighs between 3-5 oz, this is without the use of wire armatures. Some of her earliest pieces were recognized with honors in the Alaska State Fair with the rendition of Albert Einstein winning Best in Show in the Fleece and Fiber Dept. That was unbelievable since she had only started felting earlier that year: "I never knew I was artistic until I discovered needle felting", she likes to explain.

Un Món de Feltre is another way to work with felt, and it could be adapted to different type of products: brooches, keychains, magnets and what they call "Papirrachus", the personalized felt dolls. Vanessa and Tania, the creators, began with some of the best known celebrities as the Beatles, Elvis or Marilyn and, gradually, they extended the replicas to a vast collection of dolls: "We like to have characters which can be different and people continue to recognize who they are", they said. 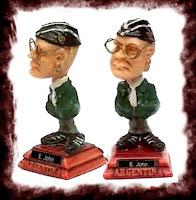 Released in Argentina, this figurine doll by Eitileda has enjoyed a good reputation for a good quality, considerate service and reasonable price! 2.75" tall (7 cms), this miniature is made in solid resin, it's hand made in hand painted polymeric resin (colors might slightly vary from picture). 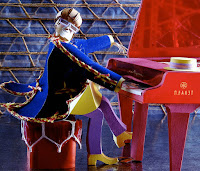 Celebrity and historical figures find a second life in these paper miniatures by people too, the collaborative efforts of russian designers Alexei Lyapunov and Lena Ehrlich. Using a range of knives, scissors, tweezers, and other tools on wire and a combination of construction and specialty papers, the team creates not only miniature furniture and figures but also entire sets for the pieces. 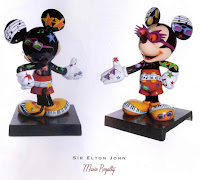 'Music Royalty', the Mickey Mouse statuette, was designed by Elton John. Disney had a contest of sorts and asked many celebrities to design a themed Mickey Mouse. The originals were about 6 feet tall. They all toured the country and were sold for charity. Elton John's Mickey Mouse fetched the highest of all, $62,400! Sotheby's and The Walt Disney Company concluded the celebration of Mickey Mouse's 75th anniversary by auctioning 75 statues of Mickey Mouse designed by popular celebrities and Disney legends. TivoliToo, a Minnesota-based design and sculpting studio, transformed the remaining statues for each artist.

The Magnetic Rocket by Janod is made up of 6 brightly coloured pieces that stack up and connect together by magnets. With has a moving propeller and a removable space man, little ones can slot together the tactile wooden pieces of this beautiful flying machine and zoom off in to outer space. It was presented to Elton and David and gave the toy for their son, Zachary. 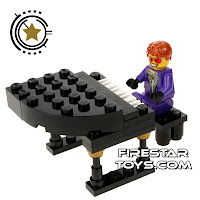 Firestar Toys presents a fantastic range of creative, collectible and rare LEGO Mini-Figures. On the website, there's one of the best selections of the most populates figures you could find: from Mutant Turtles, Spiderman, Liberty Statue, Elvis Presley, characters of Star Wars series or Lord of the Rings, just to name only a few. Elton John has his own particular mini-figure, playing at a black piano. 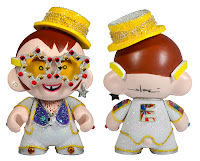 "The Elt's eyes like stars, with his imaginery covers started to live a world of fables, aliens with boundless rhythms. The lively image where the colour of sound has born". This quote reads Stor Dubiné's website and it's his particular homage to the ones that influenced his life, his childhood idols. The 23 x 23 vinyl figure has been designed using acrylic, clay and various metals.

In honor of Elton's visit to the Green Mountain State, Essex Junction, a one-of-a-kind Sir Elton John Vermont Teddy Bear was created for the rock ‘n’ roll legend and presented to him.