I remember when I was young, me and other child had so much fun. Not only for the Crocodile Rockin' thing, that so, but collecting stickers. Specially about soccer: the most famous football players were so much searched. First, going to the kiosk to buy stickers, with some money we used to save. Then, exchanging stickers with other collectors, trying to complete the album. Yesterday I found some of the old stickers I was referring, but, otherwise, I found one of Elton's. Inmediatily, Jack Rabbit came with the idea to looking for stickers around the world about music, and obviously, about Elton. Here we go with some of them: all treasures!!!

Spain, back on the 70s. Bimbo, famous for its loaf bread and cakes, presented all international singer stars with a collection of beautiful and colorist stickers. On Elton's, a brief bio, described the singer as a Dick James' pupil who was doctorated  in "harmony, direction and composition". It was considered the most famous pop singer of the time. On the back, "Daniel" and "Crocodile Rock" emerged as his definitive hits. A type mistake remarked Elton's year of birth in 1942 instead of 1947. Also in Spain, a "Super Musical" collection of spanish and international musicians and groups were released in the 80's by Eyder Ediciones, and presented Elton in his straw boater typical in his 1983-1984 era. 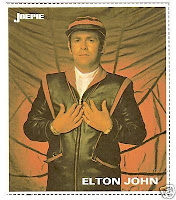 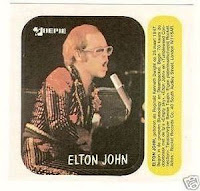 Joepie sticker cards were an interesting cards featured in an European magazine, printed in Belgium and Netherlands. They mainly featured music entertainers of the time and also a few celebrities. Elton's appeared different times. The 70s one, described Elton as the author of "Empty Sky", self titled album and "Tumbleweed Connection", it mentioned Bernie Taupin as the lyricist and gave Rocket Records then address.

Elton John wearing white winter fur coat and hat was a released by the world's leader in the published collectable sector, Panini, in Italy, Portugal and other European countries, in the early 80's, as part of a Rock and Pop album collection. Years on, in 1988, same artist with his 1987 style and dark glasses, as he followed his Wembley show after throat surgery.  On the back of each sticker, it was information related to the artist.

This one was issued in 1975, at the Captain Fantastic time, by Stig of Torino, Italy, and it was released in the British market. The collection was called "Superstars: A Top Sellers Production". The back side of the sticker read a brief bio of the artist.

What have in common Frank Sinatra, Elvis Presley, David Bowie, Depeche Mode or Elton John? Well, they all are stars of music and became part of the stickers album printed in Portugal, in the 80s.

Finally, two pages of the England's Soccer League, when Watford FC was in the Top. Players like Barnes, Blissett, Armstrong, Rice or Sheewood were in the unforgettable team that reached the Final Cup. Elton John featured as the Charmain, although it was no sticker about him. Graham Taylor, manager and Elton's friend, was on the first page, explaining his debut as a Grimsby Town FC player, and mentioning the rising of First League since Fourth Division.