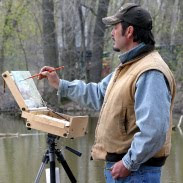 Jason reminds "Every time I get together with my Dad, I try to get out of him as much as I can. I love painting with him, but I love watching him paint even more". His dad, Larry is an art instructor, workshop painting teacher, has written a 307 page book on painting landscapes, "The Art of Seeing & Doing"... numerous videos on YouTube demonstrating painting, a DVD on painting a waterfalls, and moderating eight forums on a virtual artist's community of over 120,000 artists... Wetcanvas.com. "I have been painting professionally for over 30 years now, the first 17 years I was more career driven with reputation in the wildlife art genre. My renaissance from 20 years in studio came after taking my paints outdoors. Several things happened- I saw color as only an artist can see (painting being the deeper way of seeing)" explains Larry.

Thanks Larry. We invite you as our special guest for the Jason' Weekend Of... as a kinda surprise for him. Just with the pretention to make him smile.

Jason, and his younger brother were introduced to the concepts of hard work, a work ethic quite young in life... six & nine years of age helping with yard work, filleting fish, tossing wood I cut and split down the shoot for our woodburning stove. They saw me put in a day's work teaching art, followed with many late nights in my studio painting or wood carving. Jason used to frequently sit at the kitchen table and sketch birds landing upon a feeder just outside the window. He sketched many things, super heroes, Star Wars characters... but always drawing.

So many people tend to think the secret behind such talent, is to have a special calling out or privilege to be given a talent, perhaps by Providence or God... or to some's thinking, the chance of good fortune or luck. There may be a propensity to have a greater desire and thus clarity of understanding with someone that develops a talent early, but for many artists of Jason's stature... writing his work off (so-to-speak) as a tribute to talent is somewhat akin to insulting.

I know speaking for myself as an artist, folks at exhibitions of my work might say, "oh...it must be so nice to be born with such talent!" and the sound of it is something like nails running across a blackboard. When someone says such to me, I envision a person that easily gave up on things when found frustrated and challenged. Much easier then to simply lay a mantle of a special gifting upon that indivdual called the "artist" than look in the mirror and confess one has not the patience nor the will to live the life of sacrifice and hard work required.

As with all my art students, I work to eradicate such notions... and grow a vision of what is possible if one is only will to work very hard, focused as if on a mission. That all things are possible... to be found alive, filled with a mission for such a time as this.

I know my son's talent, and it is an incredible talent he possesses, but I know firsthand his commitment to work, to sleeplessness. An never ending, never quick to be satisfied quest to improve, to learn, to push. Some see Jason's work, and think he has arrived. He sees his work quite differently... believing we have not yet seen the best to come. It would be very hard for someone in their adult years to decide suddenly, "I want to paint like Jason" for they would have to somehow return to the age of seven and start where Jason started. The credit I should like to see granted to my artist/son is that he has believed in himself enough to invest time and the effort to do whatever it would take to succeed and become one of the best. Minute by minute, hour by hour there is hardly one that works more disciplined that Jason at those things which should catapult and gurantee one's success in the arts. When one invests time with mundane activities like endless television, pining away socially... one is demonstrating lacking vision of one's potential, and certainly the lack of value in one's calling out. 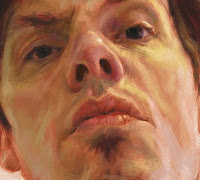 Now... as I myself get older, I see that it becomes my son's turn to encourage and push his father. As I feel the effects of gravity take its toil over my own flesh, my eyes beginning to fail me, and my sense of time running out with the inevitable discouragement that follows, I find in my son a young man, an artist... who refuses to quit believing not only in himself, but also in the me; priming and pumping me to never quit... to keep pushing. The faith and knowing I held for him, now found to be returning. Its funny how things in life seem to run and come about full circle.

Thanks so much for accepting the invitation on the Jason Seiler's Weekend.

Wow! It sounds like this text it was written to me. I used to think that I was not able to draw perfectly like Jason because I wasn´t born with the "gift" to do this. But I now realized that I just didn't pratice enough to be a great artist.

Congratulations to Larry and Jason!