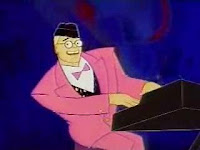 Video Clip
Club At The End Of The Street

“As soon I saw (it) I knew the flavor of the lyric screamed the 50’s and 60s, so the first thing that came to mind was “At The Club” by The Drifters, I loved all those sort of records I grew up with” declared Elton John on the Billboard Magazine Tribute in 1997. The song describes a night on the town between two lovers at a disclosed nightclub. John also describes about the music of Otis Redding and Marvin Gaye being played. Surprisingly the video was animated, due to Elton's involvement with the family of AIDS victim Ryan White: the record company demanded a video, but Elton was dedicated to spending time with Ryan. It was produced by Animation City, an animation company in London, England, and directed by Derek Hayes. 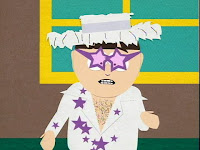 Aired on October, 7, 1998, Season 2, Episode 14. Alanis Morrisette has recorded a hit single with "Stinky Britches," a song that Chef wrote twenty years ago. When he asks for songwriting credit, the record company sues him for copyright infringement. They hire Johnny Cochran and win, now Chef owes them two million dollars. He refuses to raise money for the suit; instead Chef tries to raise two million to hire Cochran for his appeal. Meanwhile the boys put on a concert "Chef Aid," to raise the money, to their surprise, various famous rock stars, like Elton or Meat Loaf, turn up. 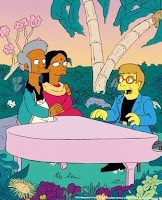 The Simpons'
"I Am With Cupide"

Aired on February 14, 1999, during the tenth season, Elton John has a cameo, as Apu's valentines to his wife, when he holds a private concert for them. "My gift is my song, and this one is from Apu" he sings.

Apu decides to show how much he loves his wife, Mamjula, by giving her a romantic surprise every day leading up to Valentine's Day, what make the rest of Springfield's men pale in comparison. And neither the men nor the women like it. Homer puts together a team of men to stop Apu. On Valentine's Day they follow Apu to the airport. When they see Elton John, they think Apu has hired him to serenade Manjula, and they lock him in a dog carrier.

Aired on thursday, July 29, 1999 on MTV. It consisted in a claymation parody television show that pitted celebrities against each other in a wrestling ring, almost always ending in the loser's gruesome death. The queen watches as Sir Elton John and Ozzy Osbourne battle. Elton stamps on Ozzy and everyone thinks he's dead. Then Elton attacks the queen so that he can have her crown and be queen, but then Ozzy recovers, and bites off Elton's head and attempted to swallow it. The head failed to go down his throat, so the Queen of England saved Ozzy by giving him the Heimlich Maneuver.

VideoClip
Someday Out Of The Blue

"I write music for everybody. I don't just write for one set of people. I'm always a kid at heart anyway" declared Elton at the premiere of the film, back in 2000. "I'm not a great lover of doing videos, so it was great to spend three or four hours at the piano and the rest of it was done by the animation crew," he said. So the video consists in a DreamWorks animation blending Sir Elton into the movie scenes. Despite The Lion King, with its African feeling, the music on The Road to El Dorado never quite evokes the South America of the film. 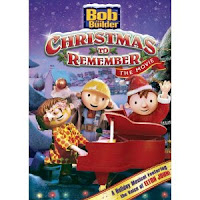 Bob The Builder
"A Christmas To Remember"

In the Christmas show, Sir Elton joined Bob on a rendition of "Crocodile Rock". Bob, Wendy, and all of their machines celebrate the holiday season. The story finds Bob's twin brother, Tom, visiting the crew just as Bob's team must build a stage for a Christmas concert by Lennie and the Lazers. A version of the song is featured on "The Album" by Bob The Builder and friends, released in 2001.

After 11 years in the making, Gnomeo and Juliet, the first animated picture released by Elton John's Rocket Pictures, will premiere on Feb 11th. The movie is based on Shakespeare's Romeo and Juliet, which tells the story of forbidden love between two sets of garden gnomes. The movie includes some of Elton's greatest hits, including "Tiny Dancer", "Don't Go Breaking My Heart" or "Your Song", and also a selection of new songs that Elton has written with long-time lyricist Bernie Taupin. ""Love Builds A Garden" is my favourite song in the film because it's such a dramatic scene and a very wistful scene full of love, and that's the way a garden grows and when love goes the garden just disappears" Elton told STV's Grant Lauchlan, very proud of this song. Nelly Furtado also collaborated in this soudtrack with the single "Crocodile Rock" and Lady Gaga stars on "Hello, Hello". The film score is composed by James Newton-Howard, a former band member.
by Jackrabbit on 3:40 pm