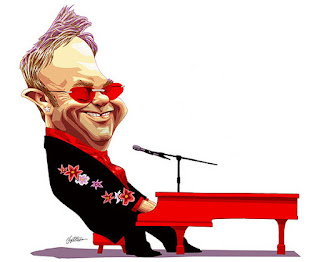 The word caricature comes from an Italian verb caricare that means "to load", "burden", or "exaggerate", so that it means exaggeration by means of often ludicrous distortion of parts or characteristics. Leonardo Da Vinci drew caricatures. So did Monet, and Daumier. In the United States in the years after World War I, caricature enjoyed its Golden Age. Although the political cartoon still remains popular, the art form also become fun, colorful, and complimentary. The most important celebrities of the world has been caricatured becoming an art growing in demand, specially in magazines and, also, in newspapers. Elton didn't escape from being caricatured and there are several artworks about him floating around the world. "The Weekend Of..." is dedicated to some of those who succeed in their work becoming legends of this art.

Our guest this weekend is well known. His works are so excellent, and so many people like them. He has worked as an illustrator for the Estadão newspaper since 1991 and for Jornal da Tarde since 2003. He is also a collaborator of the Carta Capital Magazine since 1995. His spectacular illustration of soccer star Ronaldhino a few months before the 2006 World Cup in Germany won an excellence in Journalism Awards in the cartoon category in 2007. Ladies and gentlemen, the doors of AllSongsList are all wide-open to dedicate the Weekend to... Eduardo Baptistão. 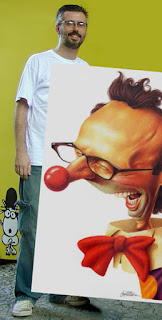 Born in São Paulo, Brazil, in 1966, he has a degree in Publicity and Marketing. He has worked as an illustrator in the press market since 1985 when he published his first work in the "Folha de São Paulo" newspaper. He has cooperated with many publications like "GloboCiência", "GloboEcologia", "Imprensa", "Vogue", "Bundas", "República", "Quem", "Sexy", "Playboy", "Veja", "Placar", "Voce S/A" among others. He has also done illustrations and covers for books and CDs, and he is so kind to share his time with us.

Hi, Eduardo, thanks so much for being here, it's really an honour to have you here. How did you become a caricaturist? How you started your career? 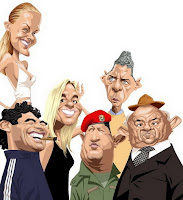 Since I was child, I’ve always liked to draw person’s portraits. Because my talent for drawing, I tried to work as an illustrator. Specially after start to work at O Estado de S. Paulo newspaper, in 1991, I started to enjoy caricatures, that were the portraits that I always used to draw, but with a very personal and peculiar distortion.

Did you read comics as a kid and if so what was your favorite?

I read comics a lot when I was a child. Later, I gave up this habit. My favourite stories were Captain America’s one.

Wow! And what is your main source of inspiration? Do you have some favorite character?

What’s the essence of caricature, exaggeration? Not Distortion? Some caricaturists can stretch the exaggeration to extremes, while others gently create kind cartoon portraits. Which is your style?

More than the distortion or the exaggeration, I search the elegance of the forms. The distortion can be lither or more exaggerated, it depends on the context.

Right! What is the key point to capture the characters’ characteristics do you think?

I like to work as with color pencils as with Photoshop. The choice of the technique depends on the destination of the drawing and how I imagine it. But I think the traditional techniques are more beautiful and spontaneous.

Would you have any objection to being caricatured if that would happen?

On the contrary. I receive caricatures from everywhere, and I always enjoy them a lot.

Hahaha Great!! I am absolutely impressed about your Elton’s cartoon. How difficult it is to caricaturate Elton?

It wasn’t very easy to caricature Elton. It’s not always that we can identify where the difficulty is. The fact is that some persons are easier to caricature than others, and we only note it when we start to try drawing it.

Could we define you as an eltonite? What fascinates you most about Elton John?

I’m not a fan, properly. I like some songs very much, mainly of the 70’s, because of the affective memories. They are songs that I heard when I was a child. I confess I don’t follow his recent works. But he is a singer and composer that I like very much. He has very beautiful melodies. I love music, I am an amateur musician. I prefer Brazilian music, but Elton is one of the international artists that I most appreciate.

And could you tell me your five favourite Elton's songs in running order, for my AllSongsList? Thank you.

It’s important to say I have been studying English, but I still understand just some words of the lyrics. I’ve always liked that songs by the melodies, even without understanding all what they say.

That's a way to learn the language, Eduardo. Where we could find your works? And also, what other projects do you have for the future? 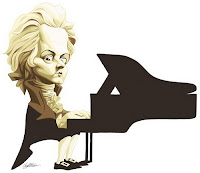 Well, here in Brazil my works are regularly published at O Estado de S. Paulo newspaper and at the magazines Veja, Carta Capital and Você S/A. I also have a blog that works as a virtual portfile: http://baptistao.zip.net. My eternal project is to publish a book with a collection of my caricatures. I hope to get it someday.

Oh, that's really expected!!! Would you want to add some observation or suggestion, or something you want to say to other eltonites?

I am very happy by your invitation, because I have a big affinity with Elton John. His songs are part of my history. Here I send a big hug to all eltonites around the world.

Thanks so much Eduardo. It's been a priviledge for me to have you here. Keep going with your great work, your success. I wish you all the best in life. You're really a talented person and, also, a very beatiful human kind. God bless you.

All pictures courtesy by Eduardo Baptistão.
by Jackrabbit on 5:44 am

a genius, very talented and intelligent, to recognize his features so that we see some art his.

My friend Baptistão is really very talented! His caricatures are fun and very well done!