Hi Eltonites. Welcome to the new year of AllSongsList and thanks so much for being there. Every year me & old Rabbit are trying to make some changes on the blogsite; not only in terms of design, also new labels, new articles. I have to confess that I've been interviewing around about 70 eltonites and I am so thrilled and excited to see that Eltonites have talent. We have singers, we have songwriters, we have musicians, we have reviewers, we have everything, a wide range. So I decided it was time to dedicate a Weekend to one of them. For the start we have to bring on someone very special. He is a brilliant young piano player and a prolific songwriter. He has many great songs to choose from in his repetoire, full of good senses: "Steady As A Rock", "Words" or "Break The Mold" remains as some of his great songs he penned in Nashville, not long time ago. The doors of AllSongsList are all wide open to receive the genious... Nathan Gaston.

Hey Nathan, how’s it going? It's supposed to be your birhday today, so, I thought about dedicating the weekend to you for the big ocassion.

Great Miquel. Couldn't be better. How are you? It's almost my birthday you know. I'll be twenty three on January 30th so I'm pretty excited.

Yes, hahahaha a kinda surprise. Happy Birthday Nathan. Let’s start now. When and why you first start playing music? And what made you fall into music?

Elton John made me fall into music actually. My dad always had his music playing and I loved it as a child and just started trying to play the piano and eventually figured it all out. I guess I was about 4 when I started really getting into it all.

Really young, lol. What are your musical influences? And whose career would you like to emulate?

Elton John, The Beatles and Paul Simon are definitely my biggest influences. But I really love just about any type of music. New indie music influences me a lot too. They are so creative, they are a lot like the groups back in the late 60's.

Right. Remember the time when you became an Eltonite, and the first time you heard Elton's music?

Well I don't exactly remember this but I have been told I could really get down to some "I Don't Wanna Go On With You Like That" by Elton back when I was about 1 year old. But I just remember really falling in love with his album Made In England. I was 7 when it came out and I saw him on tour that year and I thought that was just about the greatest thing I had ever seen.

Good album, one of my favs. How could you define your music, Nathan?

I would define it as just a good middle ground. I think I try to be exactly what I feel music should be. It should be important and it should have a message. But it should also have a hook and it should above all be fun. I mean that's what it's all about right? Having fun. I think I just strive to write good pop songs that can also have a lot of depth and substance to them that is sadly lacking in a lot of today's music.

True! How many songs could you have written? Is there one particular song that means more to you than the others?

I have written probably a little over 200 songs in all by now. I wrote my first song when I was 11 so I've accumulated quite a lot. The song that means the most to me is always usually the one I've just written. I think it's important to just keep moving and keep writing and always try to get better. I always fall in love with whatever I've just done. And then before you know it I've forgotten all about that one and I'm into the newest one.

God! That’s fantastic! And how do you approach songwriting? Do you usually write the lyrics first?

It's strange how I write. It's hard to explain. Most of the songs just seem to appear to me out of thin air. I mean like with "Walking Together", I wasn't even thinking of writing a song, and then all of the sudden I'm just walking around in my apartment and I just start singing "we've discovered a mindset, we all think alike" in my head, almost as if it were a song by somebody else. It all usually happens that way. I get an idea like that in my head and I just decide to write the rest around it and finish it. I have written lyrics first a few times and I have written to other people's lyrics a few times too. But I find usually my best stuff just sort of "appears" to me.

Are you a fan of Bernie Taupin’s lyrics?

I'm a very big fan of Bernie. He's a great storyteller. He's amazing with characters. I used to do that a lot in songs. I always had characters because I was so influenced by him. Now I think my stuff has taken more of an introspective direction but Bernie Taupin is well known for that kind of writing too. I mean something like "Someone's Final Song" is just so personal and so beautiful.

Absolutely! Do you do all of your own backing vocals, arrangements and self producing, right?

Yes, I do all of my own backing vocals, arrangements and producing. It's quite a long task sometimes but I love doing it. I just write the songs then decide how I want them to sound and just record every instrument track by track. The instruments are mostly played on the keyboard of course but I have started doing a lot of my own guitar too on the songs I record in the last year or so. I enjoy doing backing vocals too, I'm a big Brian Wilson fan.

Good. Are you presently working on an album? Which one could be the first single of a first album? 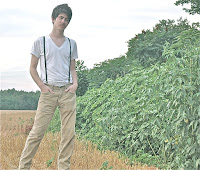 I am currently a little overwhelmed right now musically. I haven't recorded a complete album in 7 months and what has happened is now I have an overload of new songs. Just in the past year I now have close to 30 new songs and I really love them all. So I am working on a new album but it's very tough deciding if I want to record all of them or just a select few and save the rest. It's very daunting looking at 30 songs, it'll be a long road but I think it’s some of my best stuff yet. There is a new song I've written called "Is It All" that I really love. It’s a very Eighties sounding song. Very Phil Collins-ish. I would love to have it as a single or at least as a video on You Tube someday.

You must. One of my favourite songs of your catalogue, is called “A Long Year”. What’s the story behind this incredible song?

That song is one of my favorite's too. That is a perfect example of the subconscious mind at work. I just remember sitting down one night at the piano and coming up with the melody. And then the chorus just kind of fell into place. It just seemed to fit perfectly, the "I know, I know, I know.. it's been so clear...it's been a long year". And after coming up with that I realized it was really what I was feeling. A lot of times I'll write stuff not thinking it has any meaning but subconsciously it does. And I just started to think "I have had a long year". My grandfather died that March, and I was just having personal problems, relationship problems. I was unsure about the future. And I just decided to put it all into that song. The line "Life curves around like an arch, doomed from the start, till it fades to dark near the end of March", that was about my grandfather. I really like that song, I went very personal with it and I think it turned out really good without being overtly personal.

Angela was a lady I worked with that I actually didn't like very much. I was working at a store called Lowe's here in Florence, Alabama, and she was my boss and I just kinda started singing her name "Aaangellaaaa" just to kind of tease her. I guess I like the melody so much I decided to put a song to it.

Hahahaha And what’s next for you?

Next for me is just to keep striving to write as many good songs as I can that people will like and enjoy. I'm going to keep writing all I can and performing and hopefully post more videos on You Tube. I have my first music video on You Tube now of “Walking Together" and I think I'd definitely like to do some more videos. That seems to be all the rage these days you know?

Sure! Apart from music, which are your interests? What you like to do with your off time?

I have a lot of different interests. I have a 7 month old little boy named Oliver that I love. I mostly just enjoy my time with him and my girlfriend Ashley. We have a lot of fun. I also love to cook and grill, I grill steaks for them a lot. Also, I work for a bank in Muscle Shoals, Alabama and I’m a full-time college student as well at the University of North Alabama in Florence, Alabama majoring in business management. I’m hoping I can use my business degree to help me with managing my music career in the future.

Oh, finally, could you tell me your five favourite Elton's songs in running order, for my AllSongsList, where I tried to find the best of his songs ever?

That is a tough question. Elton has so many great songs. I will give it a shot though and say 1. We All Fall In Love Sometimes/Curtains 2. Mona Lisas and Mad Hatters 3. Someone Saved My Life Tonight 4. Bennie and the Jets 5. Your Song

Hahahaha Thank you very much, Nathan. It was so nice for me doing this interview. I am sure eltonites loved it. Would you want to add some observation or suggestion, or something you want to say to them?

I just want to say a big thank you to you Miquel for doing this interview with me and for helping me get my name and my music out there for more people to hear it and know who I am. Also, a big thank you to everybody reading this interview for your interest in me and my music. Your support means so much to me and I hope you'll all be hearing more from me soon. Keep rockin'.

We wish so, Nathan, you have talent and you deserve it. I am sure you will be succeed and fullfill your dreams. Since now on, you have a big fan in me. Thanks, Nathan, thank you eltonites for being here. Let's start 2011 season.
by Jackrabbit on 4:02 pm