First live appearance since retiring live. It was in Stockholm, Sweden, and featured accompanied by percussionist Ray Cooper.

Elton John became the first pop star to perform in Israel. They performed 3 times in Jerusalem and twice in Tel Aviv ending in Tel Aviv on May 6.

Daily Telegraph reported that Elton arrived in Moscow to take the Red Arrow train to Leningrad at the start of a ten day concert tour. He became the first western rocker to perform live in the USSR. "The country is not darl, grey, grim or drab. It's beatiful and the people are very warm" explained Elton about the experience. Robert Hillburn was the only American journalist to go, along with Elton's mother and stepfather. 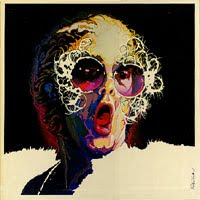 Five individually titled albums with a poster were released in UK. LP 1, titled "Early Years", contained old songs as "Lady Samantha", "Empty Sky" or "I Need You To Turn To". LP 2, "Elton Rocks" had rockers like "Saturday Night's Alright", "Street Kids" or "Midnight Creeper". LP 3, "Moods", with "High-Flying Bird", "Blues For Me Baby And Me" or "Indian Sunset". LP 4, "Singles" with hits like "Rocket Man", "Daniel" or "Island Girl". And finally, LP 5, "Classics", with "The Ballad Of Danny Bailey (1909-34", "Captain Fantastic & Brown Dirt Cowboy" or "Ticking".

Elton John reunited with lyricist Bernie Taupin after a three-year break. The songs were recorded to be released a year later on "21 at 33".

Between the recording sessions, he took a day off to go to Munich to record with producer Pete Bellote a disco album. Elton agreed if Bellote took complete charge of the project, and so it was. He spent eight hours to lay down vocals for seven songs. Release in October, "Victim Of Love" album couldn't have done worse selling eventually only 381,000 copies worldwide.

Elton collapsed on stage at Hollywood's Universal Amphitheater suffering from exhaustion due to a bout of flu. After recovering he re-took the stage for a three hour show.

Elton went to a Watford FC home game against Luton and the manager Graham Taylor, holding a bottle of Brandy, went: "Here you are fucking drink this. It's what you want, isn't it? For fuck's sake, what's wrong with you? Stop doing this to yourself". For a time after that, Elton stopped drinking.
by Jackrabbit on 5:46 am