The Eltonite's Day With... Kimberlee Kemble!!!!!

Hello Eltonites!!! Today we have a very special guest on the Eltonite's Day. I could not forget her. Someone who wrote "Conversing ’bout those Yellow Jacket days / Laughing about how the two of us sound / When we sing at Elton’s concerts these days". She's so good in writing lyrics. Her favourite quotation: "If you ask how I am then I'll just say inspired". And she is inspired. "Too bad I always forget to respond that way when someone asks “How are you?”, she says. She began a blogsite about Elton, a good blogsite, quoting news, songs, everything. It was on my list since long time ago, I adore her so much, and I envy her knowledge about Elton. So, the doors of allsongslist are all wide open to receive the fantastic, the incredible: Kim Kemble!!!!

Thanks for coming, Kim, really a pleasure to have you. So... Could you tell us, please more, who are you and where are you from?

My name is Kimberlee Kemble and I'm from Boca Raton, Florida. I've been an Eltonite since almost the very beginning. I had all the albums, the singles, EJ posters plastered on my bedroom wall (my favorites were from "Don't Shoot Me I'm Only the Piano Player"), an EJ candle, the Time Magazine cover, Tiger Beat magazines with EJ on the cover, EJ shirts, an EJ necklace, you name it. If you've seen the video for Original Sin, that's me!

Great!!! When you became an Eltonite, then? Remember the first time you heard Elton’s music and what moves you to buy his music?

I became an Eltonite back in the mid-70s at the height of EJ mania. The first song I remember hearing on the radio was "Bennie and the Jets." He had several big hits, one right after the other, so the first album I bought was "Greatest Hits." Shortly after that I bought "Captain Fantastic and the Brown Dirt Cowboy," and I was smitten - I listened to "Captain Fantastic" so much that I wore 2 copies of the album out!

People ask my why I'm still such a big fan. It's really hard for me to answer that, because there's not just one reason. His music is brilliant, yes, but it's not just that. It's so much more! It's the fact that he plays piano and so do I. That Bernie writes such poetic lyrics. That he uses orchestral arrangements. That you can't put him a box, he's so versatile. That he's still relevant after all these years. And that his music is so honest.

Yes, for sure. What was it like seeing Elton for the first time and how many concerts have you been? And, for you, which member of the band is (or was) irreplaceable? Miss someone, now?

The first time I saw Elton was in Atlanta while I was in college - he was performing just with Ray Cooper. I had nose bleed seats, but the concert was phenomenal. I've seen him about 20 times now, but that's not enough. I've traveled as far as New York City to see him, but mostly I've seen him in Florida (which, by the way, he needs to come visit us again soon)!

Well, I'd probably faint. And then when I composed myself, I would really just love to thank him for the amazing music he has brought to my life for so many years. I was thinking about it the other day, and his music has been a part of my life longer than most people (other than my parents and siblings). It's like having a friend for 30+ years that you can depend on for anything. So, I would just thank him. And then I would ask him if I could collaborate with him on a musical based on his songs (a la Mamma Mia and Abba or Movin' Out and Billy Joel). Why anyone hasn't done this already, I'm amazed. So it might as well be me! And I'd do it for free! :-)

Wow!!! That should be phenomenal!! Which is your Elton’s item that you really appreciate, for being hard to get or for the happiness you’ve got to have it?

My favorite Elton item isn't really an item, but a memory. I saw Elton in Atlanta once, when my friends had waited in line for 5 days to buy tickets for me (yes, you used to have to do that). I had front-row, left-of-center seats, right in front of his piano bench! About mid-way through the concert, Elton smiled at me. I know that sounds silly, but I know it was me that he smiled at. Really.

Well, you know that this is the 1991 week. What do you think about Elton’s Greatest Hits packages released? Do you prefer the All Time Hits... the Demos... the Unreleased Tracks... or all in one, like they did in the “To Be Continued” Compilation? And which songs should have been in a “To Be Continued” (Part Two), if sometimes were released?

All of them! I really do like the "To Be Continued" - I especially like hearing obscure or unreleased music. For example, I had never heard "Planes" until "Rare Masters" came out. What an amazing song!

What do you think about the new project with Leon Russell? What could we expect about this album? Any reference of Leon Russell? And about T-Bone Burnett as the producer?

I am so psyched! After "The Captain and the Kid," Elton said he wasn't going to do another album. I am expecting amazing things from this collaboration! To be honest, I don't know a whole lot about Leon Russell or T-Bone Burnett, but from what I've read about both, this album should be phenomenal. BTW, I do listen to other music, but I keep coming back to Elton. What can I say? :-)

http://kimoreena.wordpress.com/ or “The Captain and The Kim” is one of the best designed Elton sites on the web, in my opinion, for sure. I particularly like the playlist section! That’s a great idea. What else we could find on the website, Kim? 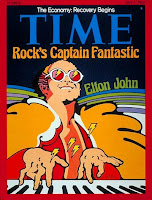 Thank you, Miquel! I'm a wannabe writer, and I've always wanted to write a blog. Well, you're supposed to write about something you're passionate about, and I am certainly passionate about Elton. Mainly, the blog is just my thoughts and memories of his music, of seeing him in concert, and of any other random thoughts that come about because of Elton. It's a pretty new blog, so I don't have many followers, but I would so love it if other Eltonites would share their thoughts and memories on the blog, too.

Honestly, I was inspired to write the blog after connecting with AllSongsList. It has been so gratifying to know there are kindred spirits out there in the world who share the same passion and appreciation for Elton and his music.

Thanks for your kind words, Kim, really appreciated. It's always a pleasure to see more blogsites about Elton growing. Apart from music, which are your interests? What you like to do with your off time?

Lately, I've been inspired to write my blog (smile). I have two teenage kids, so that keeps me pretty busy. My family says I work too much, so that doesn't leave a lot of spare time. I do love to watch American football (I'm a big Miami Dolphins fan), work out in the garden in the hot South Florida sun, and read. I also enjoy red wine. And of course, listening to a particular someone's music.

Finally, could you tell me your five favourite Elton’s songs in running order, for my AllSongsList?

Hahahaha Thank you. Would you want to add some observation or suggestion, or something you want to say to other eltonites?

Keep the passion! And buy "The Union" when it comes out. Elton deserves to have a #1 album after everything he's given us over all these years - let's make it happen for him!

It's my homage to the song Amoreena (one of my favorites and possibly some of the sexiest lyrics Bernie ever wrote). Plus, as far as I know, there's no reference to "Kim" in any of Elton's songs (sigh), so I took the liberty of blending my name with Amoreena...voila! Kimoreena.

Hahahaha. Thank you very much, Kimberlee. It was so nice for me to have you here. Thanks for sharing your time with us. Take care and a big hug!!!
by Jackrabbit on 4:31 pm