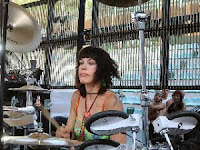 Althought Jody Linscott was born in the US, she went to England, in 1971, on a holiday "and never went back. I was squatting and studying to be a bookbinder", in her own words. Walking along in Camden Town, suddenly, she noticed a poster at the African Centre saying "Mustapha Tete Ade – Master Drummer from Ghana", and got fascinated with all the African rhythms on strange drums. Jody tried to play some rhythm: "I was just tapping along on the drum unconsciously. It turned out that the rhythm that I played was the rhythm that complimented what he was playing so it was all really surprising - I felt kinda goofy actually" she reminded.

After this first percussionist experience, she got a job at Dingwalls, in Camden Town too, as a waitress, and when it was possible, she joined the bands playing in the centre with her congas. When she got fired from Dingwalls, Jody was hired by Kokomo during one of their soundchecks. Kokomo were formed in May 1973, and their name came from an Aretha Franklin song, "First Snow in Kokomo" (a small town in Indiana, USA). That was her first professional band who shortly after got and signed a mega deal with Epic records through Steve O'Rourke, Pink Floyd's manager, and then Kokomo's manager.

Then, Jody went on to work with Robert Palmer on the album "Sneakin' Sally Through the Alley" and contacted him when she heard that Palmer was looking for a percussionist to go on tour. She built her own percussion rack for the tour to provide a variety of creative sounds, and toured with Palmer in America for about two years.

On December 28th, 1991, it was held the Amnesty International 30th Anniversary Concert. David Gilmour was the musical director, and he got some of his friends and colleagues for the band, Tim Renwick (guitar, vocals), Pino Palladino (bass) and Jody Linscott (percussion) were there. Linscott also performed in the 2007 Princess Diana Tribute concert playing percussion in the house band/orchestra.
by Jackrabbit on 1:17 pm