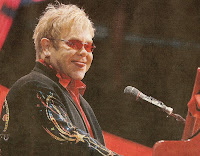 Since 2003, Barcelona were hungry to hear Elton John in concert. And that was clear, since the beginning of the show, with an audience more receptive than ever. Yes, it was a Red Piano show, a greatest hits show, but yesterday's concert was so emotional and every eltonite felt goosebumps on every song. We have heard so many times the same hits all the times but, it's incredible, how fresh they were those versions tonight. Not only eltonites, the 18,000 Barcelona crowd sang as I'd never seen, and dance as I'd never seen, accompanying a plethoric Elton (such a powerful voice).

The show began, as usual, with "Bennie and the Jets" and then it was the succession of hits, with Elton in a good form (I see Elton happy, happy these days, enjoying the music, enjoying the shows, in a good mood, so, Elton: what are you expecting to go to a studio to record a new album? upps, sorry Elton!!), proclaiming his love to Barcelona, "a big big city" and tributed Daniel Pearl, and the journalism in general, whom give their lives just for helpin' us to see the truth. Elton had time to receive a t-shirt of Barcelona Football Club, with his name "ELTON" on the back, given for a extraordinary eltonites with a great ideas on mind, and Elton loved it: "Oh, this one's for you, Messi".

It was strange not to see Guy Babylon on the band, althought Kim Bullard is a good keyboard player too. Big applauses for Nigel Olsson (Elton presented him saying (Nigel) "is singin' better than ever") and Davey Johnstone, well known both for the spanish audiences. Also, it was nice to see Elton with John Mahon backing on "Sorry Seems To Be The Hardest Word" and how Bob smiled when Elton referred to him. People jumped on the stage on "Saturday Night's Alright", played with the balloons, and had fun! That's Elton, an incredible musician with a great repertoire (all songs on the set list had been a Top 10, how many artists could say that?), a great design of David La Chapelle (great videos) and a good sound (Thanks Clive Franks!!!). A must seen concert, and, please, Elton, come back to Barcelona again, not wait 6 years more! (just a suggestion).

Oh, I have seen the papers reviews of the concert and it's a general opinion that was a great (and unexpected) night. Just one case, it seems the journalist in question would be not at the same venue as me, for the review he did, I would say. Just let me, now, write a letter in answer to him, and I hope the newspaper in question publish it tomorrow. Gonna see!

Bennie And The Jets
Philadelphia Freedom
Believe
Daniel
Rocket Man
I Guess That's Why They Call It The Blues
Someone Saved My Life Tonight
Goodbye Yellow Brick Road
Nikita (solo)
Tiny Dancer
Don't Let The Sun Go Down On Me
Sorry Seems To Be The Hardest Word
Candle In The Wind (solo)
Pinball Wizard
The Bitch Is Back
I'm Still Standing
Saturday Night's Alright (For Fighting)
Your Song
by Jackrabbit on 4:47 am

Thank you for the report. I'm a bit surprised that no song newer than "Believe" made it onto the setlist.
Kim Bullard is an interesting choice as a successor for Guy Babylon. He's a reknowned music producer with lots of album credits in his CV and not just a keyboard player. Still, I hope Elton stays in charge of the production of his next album and does not hand it over to Kim.