In March 2007, Sir Reginald Kenneth Dwight was celebrating its sixtieth anniversary and its forty-year career. This would present little value if the sixty years old man we're talking about isn't called, to the scene and for posterity, Elton John.

Elton the eccentric, Elton the exuberant, which tantrums and constums and everything often obscured the true personality he is. Behind this mask has long hidden a sensitive artist, a composer and fruitful pianist. Though this man, idolized by millions of fans, it was a time he did not like himself; he sought an outlet in alcohol, sex and drugs. As his fifties, Elton John offers the luxury of a sincere repentance: it makes peace with himself and displays his homosexuality. He met the great love, engaged in helping AIDS suffers, and composed sumptuous music movies and musicals. From his first marriage to Renate Blauel to second with David Furnish, his beautiful friendship with Princess Diana, his tenderness for Gianni Versace, his complicity with John Lennon to his disputes with Madonna or George Michael, here told one of the most major rock stars of the planet: Dr. Elton sometimes, sometimes mister John.

French Elle journalist and biographer, Bertrand Meyer-Stabley is the Payot's author at a remarkable Nureyev (2003). He wrote biographies of Marilyn Monroe ( "The Real Marilyn Monroe" Paperback - 15th October 2003), Liz Taylor ( "The Real Elizabeth Taylor" Paperback - 16th April 2004) and Grace Kelly ( "The True Grace of Monaco" DVD - May 30th 2007), only to name a few. 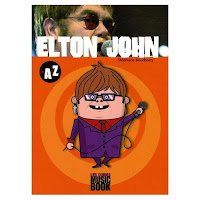 One of the greatest rock stars of the worlwide and 40 years of music career! Able to write the most wonderfl ballads and to stand up a whole stadium in one of his concerts, Elton John is tireless. On stage, in the studio and his fight against aids, Elton transmittes a contagious energy. All in one: a crooner, entertainer, romantic or provocative, the most popular artist of UK, he touched the biggest personalities of the world, the Queen too. A lot of generations sings "Goodbye Yellow Brick Road", "Song for Guy" or "Candle in the Wind", becoming immortal melodies. From A like Aida to Z like Zizanie, this MusicBook portrait the world of sir Reginald.