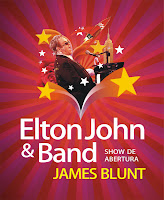 Elton John and his band will be performing on January 17, in São Paulo, at Anhembi, and on January 19, in Rio de Janeiro, at Praça da Apoteose, as part of the "Rocket Man" tour. Last time he came in Brazil, and the only time, were in 1995 for the "Made In England" Tour, with notable success. Elton is very popular in Brazil since 1972, when he reached the music chart lists with "Skyline Pigeon", one of his most succesful songs there.

Tickets for these concerts went on sale at 10pm on November 8th (for São Paulo’s concert) and 10pm on the day after (for Rio’s concert). They will be available at www.ingresso.com. or by phone, at 4007-1007 (local call anywhere in Brazil).

The Rocket Man tour began in 2007, just after the release of the CD Rocket Man – The Definitive Hits. This tour has seen Elton and the band perform over 60 concerts across the world – in Europe, Asia, Australasia, Africa, North America and now in Latin America, starting in Brazil. Elton’s last public concerts in Brazil were in 1995, during his ‘Made In England’ tour.

Opening for Elton will be the phenomenal young British singer, James Blunt. In Brazil, James Blunt will be performing with his band, Paul Beard (piano, keyboards and vocals), Ben Castle (guitar and vocals), John Garrison (bass and vocals) and Karl Brazil (drums and vocals). James’ biggest hits in Brazil so far are You’re Beautiful, Same Mistake and Carry you Home. These songs have been played frequently on the radio during 2008, and the latter two were both big hits following their inclusion on 2 TV Globo soap operas soundtracks.

Principle sponsors of The Elton John & Band shows in Brazil are Banco Cruzeiro do Sul, who are celebrating their 5th anniversary, and Nokia. The mobile carrier Vivo is also sponsoring the tour. Planmusic Entretenimento, in partnership with Brasil 1 Entretenimento, are responsible for the organization.

Ticket details - Tickets for these concerts went on sale at 10pm on November 8th (for São Paulo’s concert) and 10pm on the day after (for Rio’s concert). They will be available at www.ingresso.com.br or by phone, at 4007-1007 (local call anywhere in Brazil). On both days, call center will be operating 24h. From Monday 10th on, it will work from 6am to 12pm.

In São Paulo, it will also be possible to buy tickets at Pacaembu Stadium from 9am to 6pm every day, except on those when there are football matches on. In Rio, there will be tickets available everyday at Maracanãzinho Gymnasium from November 10th on, except on those days when there are football matches on Maracanã Stadium.
There will be 30.000 tickets for sale for São Paulo’s concert and 35.000 for Rio de Janeiro’s gig. Age restriction under 18.

Thank you very much Aline SantAnna from Planmusic
by Jackrabbit on 2:12 pm