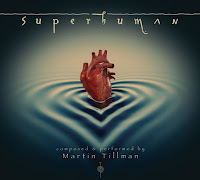 "Superhuman is a reaffirmation of the power of the human spirit" reads the liner notes of the cd. Soon it is explained what it consists: "Superhuman is dedicated to Martin’s wife Eva who 8 years ago was diagnosed with MS. Eva’s courage and strength to live with and battle against the degenerative disease inspired Martin to compose the album. And also in extension, those who everyday summon up the superhuman strength to battle physical and mental obstacles. Martin hopes his music will give audiences wings to rise above their challenges and open their mind’s eye." While he is adding: “Music lets us dream a different existence, and make it our own,” Tillman concludes. “It’s that spirit that’s now let me find a new, powerful way to express myself with ‘Superhuman.’”

His wife Eva’s diagnosis of multiple sclerosis in 2007 gradually changed Tillman’s career focus, at first in a bleak direction before he found new creative purpose in realizing his most ambitious work with “Superhuman.” “It was just super stressful and I came to a conclusion I couldn’t continue life as it was,” Tillman says. “I thought that the only way we’d survive was if I went into my studio and started writing music. Not music for other people, but music for us that would create a drive for survival and inspiration. Then in 2010, Eva told me that her birthday wish was for me to write her a happy melody, as opposed to the kind of melancholy us Europeans tend to have. That was basically the beginning of “Superhuman,” a title that was all about good energy, which is so powerful for Eva and me, while being able to touch other people in the same way.

Martin remarks the concept of the album: "We exist in a world contrary to our true nature, having to endure war, politics, technology and greed. Yet despite these by-products of civilization, our pure primal drive endures. The fear of extinction fueled our very existence and called upon everything within our power to hunt, eat and procreate. Then, somewhere along the evolutionary line, a power far greater than anything imaginable emerged: LOVE. Love gave us newfound purpose, taking us beyond our animal instincts into new, profound dimensions. A force that could only be described as magical. (...) More than any other form of art, music transports us from the physical plane to a realm of reflection, dreams and excitement. Yet at the same time, we find ourselves swaying to the melody, if not dancing wildly to its rhythms (...) It’s that spirit that’s now let me find a new, powerful way to express myself with ‘Superhuman."

About the recording process, Martin is joined with the most rellevant names of the music panorama, all together mixed with the splendorous job of one of bests mixers around: "My mixer Jeff Biggers created the album’s expansive sound. Because he had this tremendous experience recording and mixing big scores, his talent allowed me to treat ‘Superhuman’ as a soundtrack for the audience. So to just call this an EDM or a rock and roll project would be way to narrow a focus for this album" added Tillman.

11 tracks for one hour in extension album. Quite difficult to remark some in particular. "Involuntary midnights” paid my attention first: "It is a choral a cappella track I heard while driving and was immediately captured by its beauty, performed by the amazing vocal group Anonymous 4. It’s a part of a project called the Legends of St Nichlolas composed by an anonymous composer in the 16th century. Here is a bit of the legend: Long ago, in a far off land known today as Turkey, there was a boy named Nicholas. Nicholas was a person who created numerous miracles and accomplished many good deeds. As a teenager, Nicholas inherited a vast fortune, but he had no idea what to do with it. Wanting to help those less fortunate than himself, Nicholas set out to make the wishes of others come true. While Nicholas knew the townspeople needed his help, he was also aware that they were very proud people, so Nicholas decided to help his friends secretly". Then a more literal approximation of musical space travel lifts off in “Zero Gravity,” as sonar and solar wind-like effects introduce a gentle melody carried along with synths, strings and piano. It’s a lyrical theme, with a poignant sense of striving to touch a greater power, much like the experimentation that brought together the track. “I heard it at first as a ’love theme’ for the album, one that had no rhythm as such, but drifted in free time,” Tillman says. “But I felt that if strings could come in and out of it, growing each time, then it would infuse a strong life into the music. And when I heard those strings played live in Prague, I knew that this track had truly been born with a truly human feeling to it.”

“I’m happy that Martin discover this new happy side of himself in a way that also helped him escape from our own problems,” Eva Tillman says and concludes: “Superhuman’ was a way of dreaming a difference existence for Martin and myself. His music let me travel with my mind to the places I could no longer experience with my body. In that way, creativity can change anyone’s outlook. Music might not physically heal you, but it certainly can heal the relationships, and the soul. So it’s very gratifying to have people relate to Martin’s music in that way, because love is the driving force in making people rise above their challenges, and truly become superhuman. That transcendental spirit that music gives us is what this album is dedicated to.”

Read the excellent notes by Daniel Schweiger on:
https://itunes.apple.com/us/album/superhuman/id1086781365
https://www.amazon.com/Superhuman-Martin-Tillman/dp/B01C1E8M7U
http://stereoembersmagazine.com/cinematic-symphonic-electronic-journey-interview-martin-tillman/
by Jackrabbit on 6:27 pm

Etiquetes: Articles, Eltonin' Around The World, The Weekend Of...