"Rocket Man", a book from fans to other fans

"His fans will welcome this slim volume as a definitive fact-finding tool. Want to know about those funky frames that Elton wears on stage? The entry under "Glasses" gives the entire history. Can't remember which album "Philadelphia Freedom" was on? Every song that Elton has recorded and information about it is included in the song section" read Regina L. Beach, Mississippi State Univ. Lib. Breitman on a review about the book.

Or "A section on albums lists John's 35 albums chronologically, up to 1995's Made in England , and provides details on recording as well as dates, songs, and personnel. A section on performances lists concert tours and highlights major performances. Also lists some 500 songs recorded or written by John" Book News, Inc. Portland, Or. Reference & Research Book News (03/01/1996). 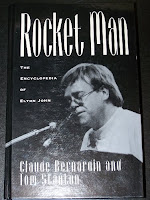 Our well-known authority on Elton, Claude Bernardin, and a former editor of an Elton fan magazine, Tom Stanton, wrote the book, edited by Greenwood Press (1995). First cover of the book, Isbn - 0313297002, is now hard to find in mint: "This Cover shot is from a Photograph by Nannette Perrine-Bac, who takes wonderful Photo's of Elton John and Other Musicians" explains Bernardin. "I loved researching Rock Music. Still all because I was a fan. When the book came out I was thrust into this", he added. "I am “just” a fan. I love Elton’s music. I can sing every song. Know them forward, know them backward. I love to talk about his Music. I can joke about it, I can be critical. I enjoy that as well" says Bernardin.

"The book "Rocket Man" came to be after I saw a manuscript Claude Bernardin had developed. He had compiled an incredible amount of research on Elton's albums, songs, performances and early days in music. It was very impressive, and it was huge. But, honestly, it wasn't commercially publishable", explains Tom Stanton about the book. Stanton is the author of several acclaimed books and the 2008 winner of the Michigan Author of the Year Award. "Three of my previous four -- "Ty and The Babe," "The Road to Cooperstown" and "The Final Season" -- were published by Thomas Dunne Books at St. Martin's Press. The fourth, "Hank Aaron and the Home Run That Changed America," was with Morrow at HarperCollins" explains Stanton. "My background is in journalism" he continues: "I owned newspapers in suburban Detroit and had founded East End Lights, the Elton John magazine in 1990. With Claude's input, I rewrote, organized and packaged the manuscript, updating the information, adding research of my own and designing the pages -- eventually landing a publisher after numerous rejections. Had I never met Claude or seen his work, I might still have done an Elton John book at some point. But it would have been vastly different. To be clear: There is no doubt that the catalyst for "Rocket Man" was Claude's manuscript and detailed research" he recognizes.

Re-released by Praeger (August 30, 1996), this encyclopedia has 280 pages in length and four sections feature:

Elton A-Z - highliting explanations, details, and anecdotes related to aspects of his career and life, with entries on celebrity friends, important places, and a wide variety of topics.

Albums - presenting a chronological, behind-the-scenes look at Elton John's more than 35 albums up to and including 1995's Made in England.

Performances - listing his concert tours year by year and highlighting major performances such as John Lennon's final stage appearance in a 1974 show, a 1979 concert in Russia, and a little-publicized 1992 tribute.

Though the book received wide media attention and was available in stores, most of the copies were sold through East End Lights. "One of the highlights related to the book came when Elton's office requested numerous copies of it. Over the years, they asked me for more than two dozen" remembers Tom Stanton. "Amazingly, then-manager John Reid's associates told me that Elton's organization did not have any resource as through as "Rocket Man." The list of songs written or recorded by Elton was of particular interest. We were proud that in magazine photo shoots done of Elton, you could see the book on his shelf. As a side note, I was contacted by Yusuf Islam's (Cat Stevens') manager after the book was published. He was intrigued by the entry related to Cat Stevens and the scrapped recording of a duet by the Cat and Elton. He was trying to track it down."

Tom, what about the experience? "Overall, it was a wonderful experience. And though Claude and I haven't been in touch much over the years, I treasure our collaboration, remain proud of "Rocket Man" and appreciate his friendship. Anyone who has talked with Claude knows that he's an opinionated guy with a strong desire to tell it as he sees it. Though I don't always agree with him, I like that trait about Claude and I know him to be a genuinely good-hearted person".

Agreements, Claude? "I would also like to thank Donna Vela, Sharon Kalinoski, Kevin Caples, John Koontz, Tim Norris, Sam Vetovich, John Higgins and Keith Levine for their support and research. They added much to this project and without any of their help I don't think it would have ever been this strong a project".

Now available on:
www.amazon.com
by Jackrabbit on 6:13 pm