Hello eltonites!!! Marvellous!!! Brazilian eltonites are so loyal. No one but Brazil could have "Skyline Pigeon" on the Top of the charts. So one of them should have been here, other time. This time, a fantastic lady: LAS!!! So, a big applause for her.

Could you tell us, please more, who are you and where are you from?

I became an Eltonite since I was eleven years old (1973). The time time I heard Elton's music, "Skyline Pigeon", was in 1973. I was a teenager and my sister worked and she bought for her Elton John's Greatest Hits. I have the opportuny to know others musics. I love all of them.

Which are your favourite albums, or the Elton´s must to have songs that should be in an eltonite's ipod?

Oh, it's hard to choose one. I love Elton's because the different styles of his songs. But I have to choose. So I choose "The Captain and The Kid". I always choose the new because Elton always look for make new things. And I want hear new Elton's songs.

I have my MP3, 2 Gb, so I chose songs of all CDs pratically.

Fantastic. What was it like seeing Elton for the first time and how many concerts have you been? And also, could you tell us if you ever have been in touch with him, get a signed autograph or even, speak with him or with other member of his band?

I was in Elton's concert in Rio de Janeiro in 1995, but there a lot of people so I saw him on the screen. It was marvelous when I was in Las Vegas to see "Red Piano" in 2008. I can see Elton. I sat in third row and vision angle was Elton and Guy Babylon. I laugh all the time because I fulfilled my dream. When went to the stage I was closer to Elton but I'm very very shy to get a signed autograph or speak with him (OMG! I can't speak. I would be without voice) or other member of his band. I only saw Elton on stage, I was so nervous.

So I saw only three concerts. The last was in Rio de Janeiro in 2009. I couldn't choose the list of songs that I wanted to hear in Elton's concert. He couldn't stop to sing. LOL I know that there are songs that he must to sing otherwise people maybe said "Oh he didn't sing "Your Song" (for example).

Which concert do you think now you should been there, for its rellevancy... for the particular show... for a funny costume he wore...?

I prefer the clothes he wears nowdays. I think that the funny costume was in the past. The concert I should been there was the one in MSG - March 25th 2007. Because his 60 years old.

Which is the most foolish thing, or incredible thing, you did for Elton, if you did it?

Probably, I will say "Hi!" in low voice. LOL

It's hard to imagine because Elton talks what he thinks. He forgot the malicious gossips ("Jesus was gay").

Hahahaha great!!! Elton had such success in Brazil between 1972-1975 and his singles reached the charts. "Skyline Pigeon", "The Ballad Of Danny Bailey (1909-34)", "Goodbye Yellow Brick Road", "One Day At A Time"... had great success in the music charts... and there are nice collectibles releases, specially Eps or special editions of standard albums, in Brazil. Which collection of Elton you recommended and how could you value Elton's success in Brazil, although he didn't played there very often, unfortunately? 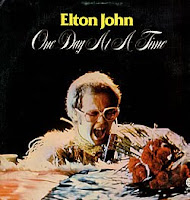 No. I heard Elton's songs on the radio since 70s. His musics always played far beyond you think.

I heard on the radio "Sacrifice" , "Nikita", "Don't let the sun go down on me", "Lucy In The Sky With Diamond", "Island Girl", "Your Song", "Can You Feel The Love Tonight", "Rocket Man", "Bennie And The Jets", "Pinball Wizard", "Don't Breaking My Heart", "I'm Still Standing", "Donner Pour Donner", "Little Jeannie", "Love Song", "Come Down In Time". And there are other Elton's songs that play on the radio since 70s.

Brazilians adore Elton's Songs. I wrote in "I Was There" that people sang with him. That's incredible. The Brazilian audience participate, clap hands, sing etc. It's so warm. Please read what John Mahon said about Brazil. Brazilians love Elton. Marroco and Egypt don't want hear his songs. But we want it so much. Some parents put his name in yor sons, such as Elton ( football player), Elton John Silva (student), Elton John (voter) etc.

Oh really? Nice!!! What do you think about the new project with Leon Russell? What could we expect about this album? And about T-Bone Burnett as the producer? You know any member of Elton’s band were in the recording process. Any rejection?

It's marvelous Elton works with Leon Russell. I always like Leon's songs. I remember Karen Carpenter and Donny Hathaway and George Benson sang his songs.

I expected that it will come an excellent album for us.

I don't know the work of T-Bone Burnett as a producer. But I know that Elton doesn't choose bad professionals, on the contrary, he always chooses superb musicians.

I always read the people who worked in each music to know them. No rejection.

Well, which is your Elton´s item that you really appreciate, for being hard to get or for the happiness you´ve got to have it?

None. I have his CDs and his songs in my mind.

I like to watch films and the others things I mentioned before.

It's hard task because I choose the songs according to my feelings. Today I choose "The Bridge", "I'm Still Standing", "Old 67", "Birds", "I Want Love".

The new songs and lyrics are excellent too. I like the new. So we must open our minds to the next CD.

Thank you very much, Leila. It was my pleasure to share this time with you. Very interesting things we talked on. It was an enjoyable experience for me. Take care.

Thank you, Miquel and all eltonites.
by Jackrabbit on 11:33 am