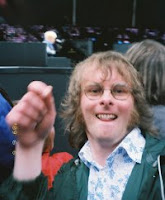 Hello eltonites!!! Today is a very special day. We have one of the greatest eltonites out there. He has a good sense of humour and his knowledge about Elton is one of the best. Ladies & Gentlemen: a big applause for ppdub73.

Welcome ppdub73, nice to have you here. It's always good to chat with you and I am glad you be my guest. Thanks for the acceptation.

Right! When did you became an Eltonite? Remember the first time you heard Elton's music and what moves you to buy his music?

I heard Elton first in the early 80s, the I'm Still Standing video was a standout, and as the decade progressed became more aware of his music. What moves me is Elton's marvellous voice and melodies. Not to mention the wonderful stories Bernie weaves with his beautiful lyrics. Every time I listen to Elton's songs for the billionth time, I hear something new. It never loses it appeal. And never will.

You have reason, my friend. That’s it!!! And what was it like seeing Elton for the first time and how many concerts have you been? And, for you, which member of the band is (or was) irreplaceable? Miss someone, now?

I have seen Elton 7 times, not much compared to others, but Elton doesn't come around to my place that often! The first time was with Billy Joel, so it was an almost overwhelming experience. Obviously it was a stunning experience, but it was over so quickly. Luckily it wasn't the last time, so at later shows you can take it in more. That's why I envy people seeing Elton for the first time, it's that once in a lifetime experience that can't be repeated. I think all band members are vital, it's impossible to choose. Guy Babylon's untimely death left a huge void, but I think Kim Bullard is doing a great job in keeping his spirit alive with the sound.

Which could be a great set list, in your opinion? Is there any song that Elton hasn’t played yet, and you think that he should do it? And you prefer the Elton’s solo tours or better with band?

Anything Elton does is alright with me! A repeat of the 60th birthday set would be nice. I would like Elton to do Cold from the Made In England album. Now that would be unreal. Elton solo is great, very much with him at the focal point, a real intimate experience. But you can't beat the band shows. The power of Nigel on the drums, Davey letting rip on the guitar. So much going on, the senses are almost overloaded. Beautiful!

Wow! That would be something else. After picking myself up off the floor, I would talk about his music, his inspirations etc. The albums, the tours, the music, that's what interests me. The one question would be, what's the feeling like at the exact moment when you finish writing a new song. I would love to know how he feels when he has created something so amazing.

Ok! And which is your Elton's item that you really appreciate, for being hard to get or for the happiness you've got to have it?

I have so much that it is hard to choose. But my signed photo of Elton, taken in Limerick in June 2009. He signed it a few weeks after the show with a lovely dedication on it. It's my prized item, and it's going nowhere.

How was the success of Elton John in your country? Which references had irish about Elton, specially in the 70s and 80s? And the most succesful albums? Could you still hear Elton´s music now on radio stations?

Elton first played here in 1979, when it wasn't popular to do so because of the troubles in Northern Ireland. The same troubles that inspired the songs Madness and Belfast. All the major albums were succesful here. After all, we are the best fans in the world! You can still hear Elton on some radio stations here, mostly the greatest hits. Unfortunately radio here is like it is in most places, full of rubbish.

Great!!! What do you think about the new project with Leon Russell? What could we expect about this album? And about T-Bone Burnett as the producer? You know any member of Elton’s band were in the recording process. Any rejection?

This album ain't gonna be like any we've heard before. The standard EJ/BT album has run it's course. So the wheel has to be reinvented. I am excited by it, I know many aren't. It should be judged when it comes out. The new song is an exciting taster, so the feeling is good. The producer has a proven track record, so there's no problem with him. As regards the band not being on it, I am a bit disappointed. I thought we had gone past the time session musicians were being used. The band is very versatile and can turn their hand to anything. The guys that are playing on it are fairly leftfield, so it's gonna be a different sound, that's for sure.

Oh, once you said: "I have a confession to make. I have never downloaded a song from the internet. That's not to say I am not able to or don't have access to do so. Also, this isn't a debate about paying for music or getting it for free. In my opinion it is more important than that. Unfortunately I am old enough to be a member of the "vinyl" generation.". Why you said that?

You've done your research! Well, since I wrote that, I have done some downloading. But I still prefer the hard copy, even if it is just a cd. You have something to hold, that's real with nice artwork. When it's on the computer, it's anoymous. Like it doesn't exist. It's very easy to forget that you have the music when it's stored that way. A pile of cds is hard to ignore!

Thanks for joinin’ the cause!! And finally, could you tell me your five favorite Elton's songs in running order, for my AllSongsList?

5 songs?! You don't make it easy! Ok, here we go: Believe, Crazy Water, Too Low For Zero, Have Mercy On The Criminal, Salvation. But if you ask me again tomorrow, it will be different!

I love football and follow Liverpool for my sins! I also collect model London buses, which is another passion of mine. Apart from that and doing the normal stuff of live, Elton takes priority.

The one thing I would say is, keep the music real. That's the most important thing.

Thanks a bunch, Paul. I have so much fun doing this interview with you. It was an enjoyable experience for me. Take care.
by Jackrabbit on 3:26 pm