Elton John and David Furnish hosted the 16th annual Elton John AIDS Foundation (EJAF) Academy Awards Viewing Party at the Pacific Design Center in West Hollywood. The event was sponsored by Chopard and VH1 and raised US$5.1 million for the EJAF, and included a live performance by Elton with his entire band and special guests Mary J. Blige and Jake Shears of Scissor Sisters

Elton John played a fund-raiser event for Hillary Clinton at Radio City Music Hall, in New York, saying he was amazed at the misogyny of some in America and he hoped that wouldn't stop her being president. 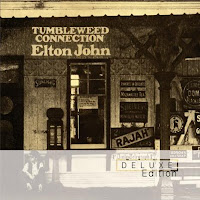 VH1 Classic and VH1 exclusively presented the U.S. television premiere of, "Elton John: Me, Myself and I". In the one-hour special, Elton revealed his true feelings about many key moments, both personal and professional, that have shaped his life. Viewers got the chance to see Elton interact with his younger self via rarely seen archive material.

Elton and David were to join a host of stars paying homage to the former South African leader Nelson Mandela in London, Hyde Park. Elton sang "Happy Birthday" on the pre-birthday dinner held in honour of he's 90th. 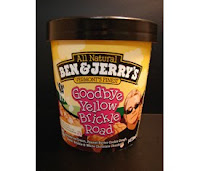 Elton was the inspiration for a Ben & Jerry's ice cream flavor: Goodbye Yellow Brickle Road, commemorating Elton's first concert in the pint purveyors' home base of Vermont. "I'm especially pleased that they will be donating the proceeds to the Elton John AIDS Foundation" said Elton.

unmondefeltre designed an Elton John keyring: "Elton has been the one who has cost more effort, as it has enough detail and precisely its apparel is not it very simple, already dominated by sequins and bright" said the Sisters about the new doll.

Elton and Lilly Allen, began arguing onstage at the GQ Men Of The Year ceremony awards. Allen, repeatedly poured herself a glass of bubbly from a bottle she kept behind the lectern, prompting Elton to give her a lecture backstage between awards. She eventually began slurring, ad-libbing and swearing, dropping the F-word five times in a single sentence at one point, according to Britain's Daily Mail, when Elton decided he'd had enough. "And now, the most important part of the night...," Allen began. "What? Are you going to have another drink?" John interjected. "F--- off, Elton," she said. "I am 40 years younger than you and have my whole life ahead of me!" Elton appeared stunned for a moment, but quickly recovered: "I could still snort you under the table," he sniped.

Broadway Cares/Equity Fights AIDS, the Elton John AIDS Foundation and Friends in Deed benefit from the starry Goodbye Yellow Brick Road concert that was held at the New Amsterdam Theatre in New York. The concert, which celebrated the 35th anniversary of the U.S. release of the acclaimed Elton John-Bernie Taupin double album, "Goodbye Yellow Brick Road," raised $1 million in support of the three charities. Elton wrapped up the night with the last three tracks: “Roy Rogers,” “Social Disease,” and a gorgeous delivery, with a choir, of “Harmony.” 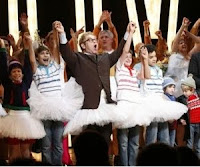 "I had never thought in a million years I'd ever be standing in Broadway and talking about something I'd written for the stage," said Elton at Broadway's Imperial Theatre about the mounting of Billy Elliot. The musical concerns a working-class boy's dream of becoming a ballet dancer — and the obstacles and advocates he encounters. The role of Billy was cast with three actors: David Alvarez, Trent Kowalik and Kiril Kulish.

Elton was added to the more than 70 tributes to celebrities and “friends” of the Olympic Park as part of the Walk of Stars, in Munich, Germany, and pressed his exceptionally gifted hands into the Munich cement. A precondition for being immortalized is that the personalities have been successful in the Olympic park facilities.
by Jackrabbit on 1:44 pm