Elton was inmortalised in wax at Madame Tussaud's in London. He was the first Rock star since The Beatles to be so honoured.

Radio One began a seven part series titled "The Elton John Story", written and presented by Paul Gambaccini. Parts two, three, four and five were broadcast on May 11, 18, 25 and June 9, while parts six and seven were held until 1977.

Proceeds from the concerts at Earls Court, London, benefit the Sports Aid Foundation. The two events purchased about 40,000 pounds. 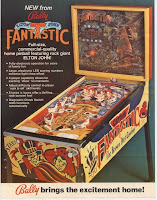 Bally produced an Elton John Pinball Machine. 'Captain Fantastic' was inspired by the movie 'Tommy' and includes a representation of Elton John, as his character from the movie, playing pinball on the backglass. 16,155 units were manufactured. A home version of this game was also produced in the following year. Artist Dave Christensen included in the backglass several depictions of people doing things that, at first, escaped notice by Bally management. A small number of games with these so-called "X-rated" or "uncensored" backglasses made it through production before changes were made to the glass. Specifically, small mirrored stars were added over the objectionable parts and, curiously, not in all instances did these stars effectively obscure the offending art. 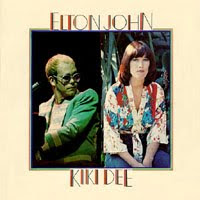 Release of "Don't Go Breaking My Heart". "Well, we were in Barbados for Christmas, and Elton came to me and said, 'I really want to write something uptempo, like a disco soul thing.' So I went upstairs and started banging away on the typewriter. In five minutes I'd done something, came downstairs, and just gave it to him. In the next five minutes, he finished it, and it was great. It was just one of those things that sparked off immediately. As soon as he played it, I said, "Well, that's gonna be the next single. That's a hit." Elton then suggested recording it as a duet, with his favorite female singer, Kiki Dee. He called her and explained his idea for a song. She was more than willing, and met him in the studio. Elton actually taught her the tune during the recording process. This added to its spontaneity, and, in Kiki's words, made it "a whole lot of fun." reminded Bernie.

Elton John spent the day with Paul McCartney, Ringo Starr, Harry Nilsson and others while in Los Angeles. Later that night, he took Cher to got see Wings' final American concert at The Forum.

At the evening show during an Elvis Presley Tour in Largo, Maryland, Elton met Elvis backstage, during the intermission. 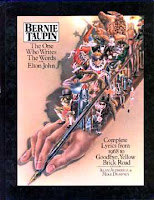 Release of "The One Who Writes The Words For Elton John" by Bernie Taupin. A complete collection of songs written by Bernie during the period from 1968 to the Goodbye Yellow Brick Road album. In addition to the lyrics from the albums, this book contained the lyrics to all the single b-sides, various rarities, and Taupin's 1970 spoken-word album. The songs are illustrated by various artists, friends, and celebrity guests such as John Lennon and Joni Mitchell. Included a cover design by Alan Aldridge.

Elton and the band began a seven date series of sold out concerts at New York's Madison Square Garden, breaking the house record set a year earlier by The Rolling Stones. Guest stars included Divine, Alice Cooper, Kiki Dee and, also, Billy Jean King. The New YorkCommunity Choir joined the band each night during "Tell Me When The Whistle Blows".

Elton made a guest appearance at Kiki Dee concert performing "Don't Go Breaking My Heart". On Elton's "Louder Than Concorde" Tour, Kiki appeared during Elton's set through her first hit, I've Got the Music in Me, and then joined him for their ear-pounding duet. (People Magazine)

Elton was pictured on the front of "Rolling Stone" magazine with the headline "Elton's Frank Talk: The Lonely Life Of A Superstar". During the interview with Cliff Jahr, he talked about his bisexuality for first time: "There's nothing wrong with going to bed with somebody of your pown sex. I think everybody's bisexual to a certain degree. I don't think it's just me. It's not a bad thing to be".

Elton was the special guest on the Morecambe & Wise Christmas Show, performing "Shine On Through". Also, he played "Don't Go Breaking My Heart" with Kiki Dee on Top Of The Pops Xmas Show.
by Jackrabbit on 7:32 am