The Story Behind "Goodbye Superman" 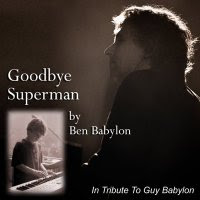 Ben Brown-Babylon was just 11 years old when he wrote this song as a tribute to his father. Now released as a single, Ben was assisted in the recording process by Jesse Johnstone, son of Davey Johnstone, who recorded most of the instruments there played, and for the Grammy-award-winning engineer and producer Greg Penny, who also worked with Guy when he recorded and produced Elton John's album, "Made in England." There are two versions of the song: an orchestrated version, and a piano version, both performed by Ben.

Every note played is packed with emotion, depth and skill way beyond Ben's young age. The intro seems influenced by Elton's "Funeral For A Friend", that intro Guy Babylon used to play live in concerts. Then, the music develops to an intensive and brilliant piano playing, mixed with a powerful lyric, written by Ben himself.

Like Elton is his best rendition performances, "Candle In The Wind" for Lady Diana, in 1997, or "Skyline Pigeon" for Ryan White, in 1990, Ben Babylon performed it at his father's memorial service, and he drew his strenghts like a great artist he is, and delivered a very emotional playing that left everyone in the audience with tears in their eyes. Only Guy, from Heaven, might smile, proud to see his kid taking control of the keyboards.

Available on iTunes and most other mp3 stores.

Etiquetes: Ben Babylon, The Story Behind