Guy was born on December 20, 1956 in New Windsor, Maryland. He attended Francis Scott Key High School and continued his education with an athletic scholarship at the University of South Florida. “I took piano lessons for a couple of years, my sister and I. (...) I didn’t really get serious about music until I was maybe a senior in high school” explained Babylon in EEL (1993). Six months after graduating with a BA in music composition and theory, he moved to California and joined up with the band “Iron Butterfly”.

In 1986, he joined Bob Birch in a band called “Ashton”. After a year or so he went his own way, backing many artists, from Tavares to Luis Cardenas, composing music for radio and tv spots, tv and cable shows, doing demo work and putting together a home studio. In 1987, he co-wrote and performed Siedah Garrett's "K.I.S.S.I.N.G" which became a No. 1 dance hit in the U.S., and performed with Davey Johnstone.

He joined Elton’s band in 1988, when he got a call from Davey Johnstone, Elton’s musical director, asking if he would be in Elton’s band because they were searching a new keyboard player. “There was no audition. I guess he just had a feeling that I could do the gig, and I’m still here” said Babylon in Keyboard magazine in March 1987. Johnstone met Babylon in a self-produced session one year before. In 1990, he appeared with the group Warpipes, a side project of fellow Elton John member Davey Johnstone. Guy and wife Kathy, who does session work and teaches voice and piano, married in February 1991 and became parents on Nov. 10 of the same year, when Max was born. His other son, Ben, was born six years later, and also, he had a stepdaughter, Jessica Hoggarth.

In addition to recording 12 albums with Elton John, Guy recorded with such artists as B.B. King, Ray Charles, Billy Elliot, Eric Clapton, Fats Domino and Dwight Tilley. Guy also won an Grammy Award for his contributions on the Elton John / Tim Rice musical Aida. Babylon started work on Lestat in 2003, when Elton John began composing the score. "He'd come into the studio early and write a song, and then I would spend the rest of the day creating an arrangement," he recalled. "So it was basically Elton, Davey, and me in the studio with an engineer. We made pretty elaborate demos of all these songs. In fact, if you listen to the demos from beginning to end, it sounds like an album." Guy also had a hand in crafting arrangements for the final production "overall, I'm just a small part of a team of people" he explained.

At his free time, Guy was a sports fan as well as a participant. In addition to swimming and track, Guy also played football and basketball. But one sad day in September, 2009, the eltonite's community felt devasted and heartbroken when reality said that we had to go on with him not here, on our side, but in Heaven, playing music for angels. But all we are agree that a genuine and very high quality person as him, will not be never ever forgotten, no, also we have his music. Guy Babylon was an entire symphony. Always friendly, Guy always took the time to talk to the eltonites. As Elton said: "Guy was one of the most brilliant musicians I have ever knew, a true genius, a gentle angel - and I loved him so much", he wrote. No one but Elton could define better his keyboard wizard. 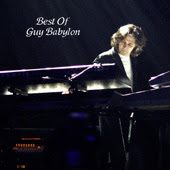 A collection of Guy's music is released, "The Best of Guy Babylon", and it's available for download on iTunes. The album features 10 tracks, including a remix of Babylon Bleu, the composition that won Guy the Keyboard Magazine Reader Tape Contest in 1987. Eight additional instrumental pieces are included, plus a lovely ballad co-written with Ken Stacey, "She Is", and a rocker co-written with Davey Johnstone, "Friction".

A fund in Guy's name has been established. Those wishing to contribute can make a donation directly to: