The Story Behind "Dogs In The Kitchen" 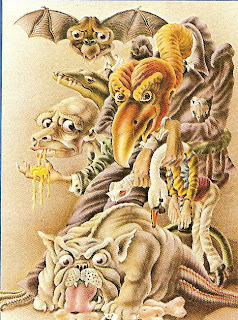 The idea about the autobiographical album came after Bernie wrote a poem called "Dogs In The Kitchen". Though the lyrics were included in the scrapbook of the album, it don't seems that any music was set. Bernie's bitterly cynical portrayal of corporate greed in the entertainment industry. It was not, it seems referring to Dick James but to a familiar world, nevertheless.

Both preplanned the running order of the album lyrically before Elton wrote the music to. "Bernie had the idea of writing about how we met" explained Elton at that time. "I had the feeling that it won't be commercial but I never know what is and what isn't". And like a book, the album was played chapter by chapter, song by song, in order to complete their story.

"All our innocence gave way to lust
As the peacock spreads its fan,
And they taught us how to crack the whip
While the businessmen got tanned.

In the months that passed by the agents cried
And the flunkeys all got paid,
While the fortune seekers pale limp wrists
Showered us with bright bouquets.

Like soldiers on the road to battle
Poor boys fight to stay alive,
Take a roller coaster or the wheel of fortune
Just be sure that you can land it on the other side.

Uncage us where restless, snarled the dogs in the kitchen.
Howling in the heatwave, riding all the bitchin' ladies.
Who got the first bite on the greasy bone, take my advice kid
Tear off the white meat, leave them the fat back at home.

Empty eyed souls with expense accounts
Take a luncheon eating humble pie.
While the vultures belch in their swivel chairs
And the vampires all wear ties.

From the lips of a sweet young starlet
Amber eyes and sex appeal,
Or a swan song sung by some finger snapping kid
In a cumberbund and cuban heels.

Though the team survived the glass house cracked
And the martyrs all got stoned
But a friend outside slipped a file in
While the jailer slpet at home".
by Jackrabbit on 1:58 pm

I believe the vitriol was aimed at MCA Records, as Bernie and Elton had to sue them to get the publishing rights to their songs.
Dick James apparently passed away during the trial, and his son believes it was from the stress. I don't know the official relationship between Dick James Music and MCA -- DJM, I believe was both a UK record company and a publishing house, and the early Elton John albums were released in the UK on Dick James Music. The "scratchboard" illustration cover for "Empty Sky" was the DJM version, then later an odd little line drawing, perhaps of a sphinx with a person standing next to it ended up on later pressings of the MCA version. No idea why.

I also understand that no music for "Dogs" was ever written. I've seen suggestions that there's an outtake or unused master of it lying around, but that has never been supported. If anything, the unfinished song scenario seems to be the most logical one. As far as anyone knows, the only finished outtake from those sessions seems to be "House of Cards," the b-side to "Someone Saved My Life Tonight."