The Story Behind "A Word In Spanish" 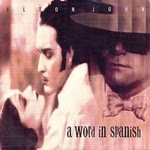 "A Word In Spanish" still retains the intelligence of Elton & Bernie's older romantic songs. The song was recorded early in 1988 at James Newton-Howard's house in L.A. and played a spanish-flavored acoustic guitar by Davey Johnstone.

The song referred to an imagined movie scene where Bernie became a would-be lover, but he doesn't know how to tell the affection he feels for his love, so he reminded a film he once saw. Although he didn't understand the word, he mimic the performance for his real life hoping it will work for him too.

When manners make no difference
And my gifts all lay undone
I trade my accent in on chance
And fall back on a foreign tongue"
by Jackrabbit on 2:10 pm