The Story Behind "Pinball Wizard" 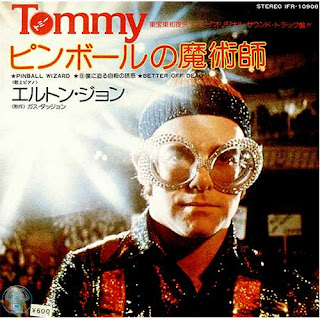 Director's Ken Russell approached to Elton, when he wasn't even a star, to appear in the opera-rock "Tommy" movie, first as The Uncle Ernie, but Elton was not going to put pleasing and declined the offer. Russell then offered the role of pinball wizard to Rod Stewart but Rod, following Elton's advice, declined the acceptation. Elton reminded the situation: "Rod approached me and said: "they're going to do a film and I said: oh no! not a film now! Bloody hell, what are they going to do next?"" explained Elton "I said to him: I should knock it on the head if I was you".

About a year later, Pete Townshend was still having trouble finding a suitable pinball wizard for the project and approached again to Elton. "I ended up doing pinball wizard and Rod couldn't believe it: "you bastard..."". Rod was angry to learn that Elton had taken the part: "he was really furious and quite rightly so. But Pete has always been a very good supporter and I should do things back for him".

The track was the last recording for nine years by the band featuring Davey, Dee and Nigel. Elton throw in a little of Who's song "I Can't Explain".

Elton enjoyed the film experience. He had to wear giant Doc Marten boots attached by callipers, which allowed him to move as if on stilts.
by Jackrabbit on 3:44 pm