The Story Behind "Friends" 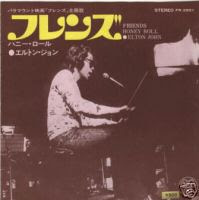 On October 1969, Elton and Bernie signed with Paramount Pictures to write three songs from the Gilbert Lewis film "Friends" before they weren't famous as then it would be. After hearing the "Elton John" album, Lewis' son John approached the pair about scoring the film. The three songs were "Friends", "Michelle's Song" and "Seasons".

They finished the composition process in Augoust 1970, after re-recording some of the songs and, as a result, some of them had different versions in film and soundtrack. Several instrumentals for the project were written by Paul Buckmaster, not Elton. The soundtrack album were completed with some of the "Tumbleweed Connection" outtakes. "I didn't want only three songs on the album and fill it out with garbage" said Elton.

But the songs were written for the film in a strict of sense, in fact, Bernie addmitted not even reading the whole movie script.