The Story Behind "The Lion King" 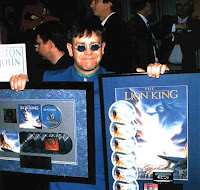 "The Lion King" opened so many doors for me in the '90s" exposed Elton in a recent interview. "Up to that point I was just making albums and touring and promoting them, which was OK, but "The Lion King" obviously enabled me to write for animation". And that's it is. In the list of more selling soundtracks album in the U.S., the album became third:

In 1991 Walt Disney company recruited lyricist Tim Rice to write lyrics for an animated musical about the life of a lion. "Elton was my first choice" said Tim when they asked about who should do the music. "I actually jumped at the chance. John Reid (the manager) told me "If you don't do this, I'll kill you"".

"Circle Of Life" was the first song written for Elton and then, Hans Zimmer added the african sensivility. In the album, Carmen Twillie, who collaborated with Elton in the 21 At 33 sessions, lead the vocals. The song succesfully set the spiritual tone of the movie: the saga of cub Simba began here.

Elton had to do a song called "The Warthog Rhapsody": "That's the end of my career" joked Elton while composing. The song were replaced in the film by "Hakuna Matata" which means "No Worries" in Swahili.

But the most famous song from the album is the Oscar-winner "Can You Feel The Love Tonight", though he had three songs nominated in the best song category. 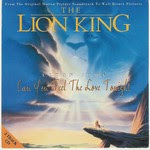 This romantic song suggested a romance between exiled Simba and his childhood friend Nala. Disney first thought was to drop the song from the movie but Elton insisted the song romance should be restored, because he couldn't imagine a Disney film without a love song in it.

"It's probably been the most pleasurable experience of my career" confessed Elton about the experience.
by Jackrabbit on 2:50 pm