The Story Behind "The Muse" 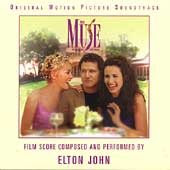 Stephen Thomas Erlewine (reviewer from All Music Guide) found the score such a delightful little score, though the title track "is a solid, if not particularly memorable, exercise in late '90s mid-tempo adult contemporary craftsmanship, but the majority of the album is devoted to the wonderful, lighthearted, orchestrated score from John. It's never deep, but it's nimble, clever, and engaging, even when taken on its own terms, apart from the film".

In the film argument, Albert Brooks is Steven Phillips, a veteran screenwriter who is told he has lost his edge. A fellow writer with a string of successes under his belt (Jeff Bridges) refers Phillips to Sarah (Sharon Stone), a professional muse. The Elton John music is brief, as they were written to fit short part of scenes or to augment transitions scenes and establish shots.

Asked to be involved in the film by friend Sharon Stone, Elton return to his most orchestral and classic roots. The title track, written by Bernie Taupin, lack of inspiration, ironically enough, the bland vocals are all about artistic creativity.
by Jackrabbit on 3:26 am