The Story Behind "Border Song" 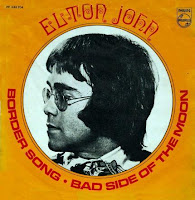 It’s a quasi-spiritual song, more than somewhat of the Edwin Hawkins singers’ “Oh, Happy Day”. Elton had said the song was about an alienation Bernie felt in and about London at that time and his desire to visit home more often as he could do.

The lyrics, again, had a lot of interpretations, specially for its declamatory “Holy Moses” and its last verse “He's my brother let us live in peace”. This last verse was, in truth, written by Elton who felt that song was too short and tried to summarize it at the end. The sentiment of the song was a plea for racial harmony “There's a man over there / What's his colour I don't care” despite hostile surroundings, a message that resonates strongly in America still convulsed by the Civil Rights and Black Power movements.

Thought the single did not reach the charts, enough impact was made to get Elton a booking on BBC’s Top Of The Pops, and Aretha Franklin covered a successful version that reached the US Top 40.
by Jackrabbit on 7:11 am

Caleb Quaye in his autobiography book said that Elton wrote the last verse in dedication of him.
Andrea