In confession, there are many fansites out there, which is great. We eltonites spent our freetime talking about Elton: news, concerts, bios, ... Most of them are in english. Years ago, I found a great eltonfan website, in french, this time. I just understand french a little, but it's an amazing and interesting website about Elton. That's "Made In England". It's an honour for me to have his owner, Patrick, to chat a little about the website and about Elton, of course.

So thank you for the acceptation, really a pleasure to have you... Could you tell us, please, who are you and where are you from?

Hey Miquel, thank you for your kind words. My name is Patrick Andrey and I’m living in Lausanne - A beautiful little town located in the French-speaking part of Switzerland. I’m 38 years old, married, one child (10 y.o.) and I work as Manager in a Consumer Electronics Shop.

Well, I was 13 years old when I became “Elton addict”. At that time (1983), I liked “I’m Still Standing” who got a lot of radio airplay at the time. I liked the energy and this great voice. My sister bought me “Too low for Zero” on vinyl. Since then, I was hooked: I bought every new album on the release dates. I recorded every TV shows, etc…

The first time I saw Elton live was in my home-city, In a small venue called “Théâtre de Beaulieu”. I was so ecstatic! It was a memorable night. A dream came true. Amazingly, I recently managed to buy the actual cap Elton wore this evening (see the pictures). 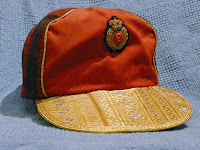 I really don’t know how many Elton concerts I attended but I can tell you that I have seen all his tours since 1986. I have seen him in all the configurations: solo, with his band, with an orchestra and choir… I travelled a lot to see him live: France (Paris, Grenoble, Divonne), UK (London), USA (Las Vegas this summer) and of course in my Switzerland (Geneva, Zurich, Basel, Vevey and Lausanne).

I have never been directly in touch with him. I only managed to shake his hand twice (in concerts) and got a lot of autos from him and his band. The most memorable was in Grenoble (France). I wore a Watford T-Shirt for the concert. When Elton began to sign autographs, I pull it off to handle it to him. I took the shirt in his hands, look at it then show it to the crowd (with a lot of cheers from the public). He then signed it for me (see the picture). At the end of the concert, when I was leaving the venue, a young lady came toward me and asked to have a look at the T-Shirt. She told me that I was filmed in the giant screens when Elton signed the shirt so she recognised me…

Wow!!! As you know, this is the “The Lestat” Week. From all the musicals Elton composed, that was the only one not successful. In my opinion, there are several good songs on it. Maybe Taupin wasn't the suitable writer Elton could choose, or maybe he couldn't condensed the three Anne Rice's books in one single story. What do you think about this musical and the bad reviews it received?

To be honest with you, I don’t really liked Lestat. I only listened it twice and It doesn’t sparkle for me. I don’t really have an opinion; I will maybe give it a second chance one time.

Nice! Elton became very popular in France since the "Blue Moves" album, especially at the time of "21 At 33" and "The Fox". Even he duetted with French star France Gall with two singles that became a huge success then; they reached the top of the charts I believe... did they? And which are the people's favourite Elton's albums or songs, in your countries? And could you still hear Elton’s music in the radio, nowadays?

Well That’s right, Elton became popular in France with “Tonight” from “Blue Moves”. Strangely, the France was a very difficult market for him to win. It was painful for him because he really likes the French culture. He even likes to speak in French. He recorded a lot of songs in this language: "Donner pour donner" & "Les aveux" with the lovely France Gall, "J’veux d’la tendresse", "La vie en rose"…
People’s favourite songs in France: Certainly “I’m Still Standing”, “Nikita”, “Sacrifice” and “Candle In The Wind 97”. Nowadays, Elton is not widely broadcasted on the French radios. Apart from adult-contemporary music stations like “Nostalgie”.

And what should be Elton’s next step in his career, in your opinion? What is the place for Elton in the world music, today? I think he is thinking to write music only for other people, musicals for examples, or more collaborations with other singers, but no more Elton albums... May I am right?

Even if he said that he doesn’t want to make new records, I’m sure he will: Music is his life!!! But I think he changed his way to do it. Previously, he was making commercial music: always trying to make THE hit and trying to top the charts. Now I guess he matured. He understood he could makes music for his (and his fan’s) pleasure. That’s not the same goal and his latest albums are far better. He could continue to write Movie Scores or Musicals (He’s so proud of Billy Elliot).

Please, tell us what we could find on "Made In England" website... that's on http://www.eltonjohn.ch/ I particularly like "The Museum"... You have really good items about Elton, have you?

I launched “Made In England” in 2000. At the time, I wanted to provide something for the French-speaking community and I had big successes with this site. It became the biggest Elton John related web-site in French, often cited in the medias (TV, Radio, Newspaper, Books) in France. “The Museum”, (it’s pompous, isn’t?) is dedicated to my collection. I have some nice new items and I really have to update this part of the site. The idea was to show my visitor’s collections as well but it doesn’t seem to attract active fans. If you want to show your treasures… then you’re welcome.

Firstly, I want to congratulate you for your site, I had a good time browsing it. Secondly, I want to thank you for contacting me, It’s a nice idea to build this bridge between the fans (aka Eltonites).

No it isn't, Patrick. Thank you very much, really a worth experience for me to do this interview. An honour you share your time with AllSongsList. Take care and good luck.
by Jackrabbit on 3:37 pm